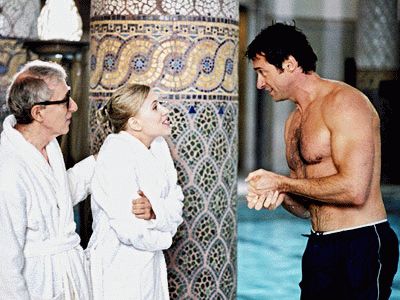 Match Point, Allen’s best movie to date, was criticized in some quarters because it transplanted many of his concerns from New York to London and because it had an uncharacteristic seriousness and precision. Scoop, its lame successor, is also set in London and also costars Scarlett Johansson as another American greenhorn (a journalism student instead of an aspiring actress) who becomes involved with another wealthy Englishman who has a country estate. And once again there’s the plotting of the murder of a girlfriend that calls to mind Theodore Dreiser’s An American Tragedy. 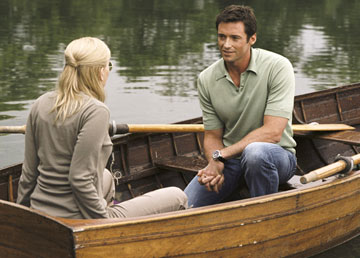 As in Allen’s Broadway Danny Rose and The Curse of the Jade Scorpion, there’s an affectionate nostalgia for low-rent showbiz and its performers (Allen plays a touring magician named Splendini, aka Sid Waterman). As in Manhattan Murder Mystery, there’s an unsolved murder. As in Manhattan Murder Mystery and Jade Scorpion, Allen joins the leading lady as a fellow sleuth (this time his character poses as her father). In keeping with Allen’s rigidly codified view of decorous upper-class English life, the score is exclusively classical (in films set in the States jazz is his standby) and familiar to a fault: Swan Lake, The Nutcracker, and “In the Hall of the Mountain King” from Grieg’s Peer Gynt, which is identified with the serial killer in Fritz Lang’s M (this movie has a serial killer too).

One form of low-rent showbiz Allen depicts in Scoop is Fleet Street journalism, but it’s depicted with none of the witty rancor or intelligence of Evelyn Waugh’s 1937 Scoop. Allen doesn’t have too much affection for this trade, certainly not as much as he does for magic. But then he uses journalism as little more than a plot device. A legendary reporter named Joe Strombel (Ian McShane) dies and crosses the River Styx in a boat. (This being a Woody Allen film, the boat offers two Scandinavian art-movie references: it’s steered by a Bergman-esque figure cloaked in black and carrying a Dreyer-esque scythe.) Strombel casually strikes up a conversation with another passenger, Jane Cook (Fenella Woolgar), a former secretary who believes she was poisoned by her aristocrat boss, Peter Lyman (Hugh Jackman), because she found evidence suggesting he might be a serial killer. Believing he’s stumbled upon the scoop of the century, Strombel jumps off the boat and reemerges among the living, popping up inside the coffin-shaped box where the journalism student, Sondra Pransky, is standing, having volunteered to assist the magician. Strombel reveals the possible identity of the serial killer and periodically reappears over the course of the film to coach her on solving the crimes, generally evaporating after a few exchanges. 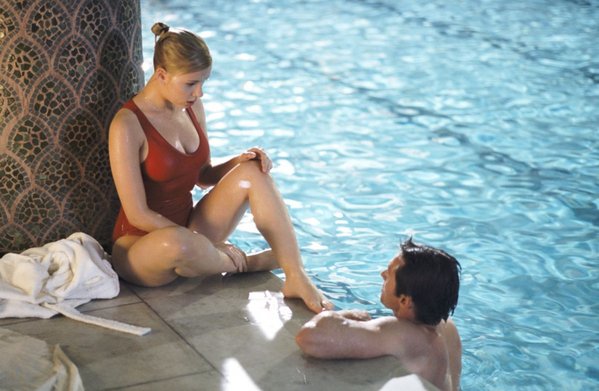 It’s not clear why he chooses a journalism student instead of a journalist to tell the story to or why he tells it only to her. Perky Jane Cook isn’t around long enough to provide any moral reflections, just some exposition. It would have been a lot more fun if she’d dived off the boat along with Strombel, and if this had been the Allen of The Purple Rose of Cairo or “Oedipus Wrecks” (his episode in New York Stories), maybe she would have. I kept hoping to see her again, not realizing that Allen had fewer compunctions about eliminating her than the serial killer did. And Sondra, who has no compunction about having sex with a guy she suspects is killing other women, doesn’t provide any moral reflections either; her actions are just pieces of the formulaic plot, excuses for more mechanical crosscutting.

Allen doesn’t get us to care much about any of the characters here. Sondra’s a bit of a dumbbell, and she isn’t charming. Her English roommate is, but like Jane Cook, she’s just another bit of plot machinery. And Lyman’s such a standard-issue English playboy he periodically seems to evaporate from the screen himself. Only Allen as the wiseass Splendini comes across as having much depth or character. But that’s probably just because he’s familiar — we’ve seen him so often we can fill in the blanks. 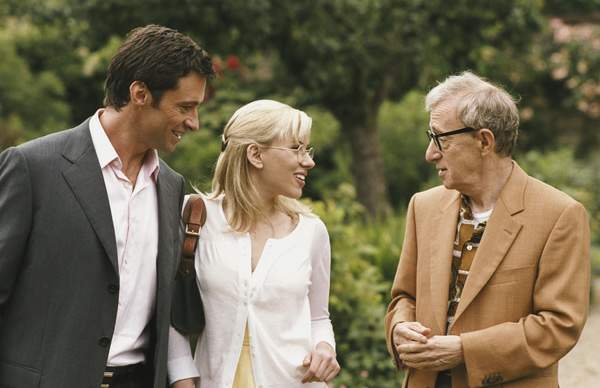