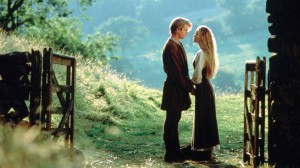 The nice thing about Rob Reiner’s friendly fairy tale adventure, with a script by William Goldman adapting his own novel, is how delicately it works in irony about its brand of make-believe without ever undermining the effectiveness of the fantasy. The framing device is a grandfather (Peter Falk) reading a favorite book aloud to his skeptical grandson (Fred Savage), and it’s the latter’s initial recalcitrance that the movie uses both as a challenge and as a safety net. In the imaginary kingdom of Florin, the beautiful Buttercup (Robin Wright) gets separated from the farmhand whom she loves (Cary Elwes) and betrothed to the evil Prince Humperdinck (Chris Sarandon), until the nefarious Vizzini (Wallace Shawn) sprints her away. The colorful characters and adventures that ensue are, at their best, like live-action equivalents to some of the Disney animated features, with lots of other fond Hollywood memories thrown in: Andre the Giant is like a cross between Andy Devine and Lumpjaw the Bear, while Mandy Patinkin’s engaging Inigo Montoya conjures up Gene Kelly in The Pirate. Every character, in fact, is something of a goofball, and while the film is inexplicably saddled with a PG rating, it delightfully cuts across age barriers to keep everyone charmed. Even the crude ethnic humor that gets thrown in — Billy Crystal’s Mel Brooksish Miracle Max — doesn’t quite prick the dream bubble, and the spirited cast — which also includes Christopher Guest (as a six-fingered sadist), Peter Cook (as a lisping clergyman), and Carol Kane (as Max’s wife) — is allowed to have a field day. (Water Tower, Ford City, Golf Mill, Norridge, Oakbrook, Old Orchard, River Oaks, Woodfield) 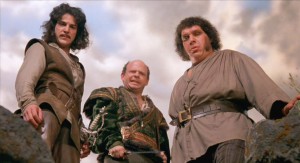