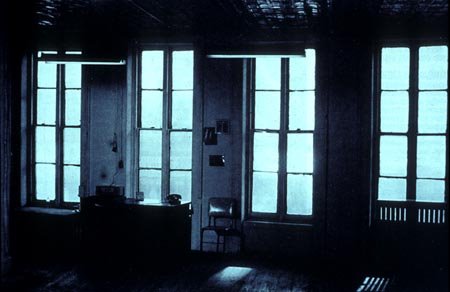 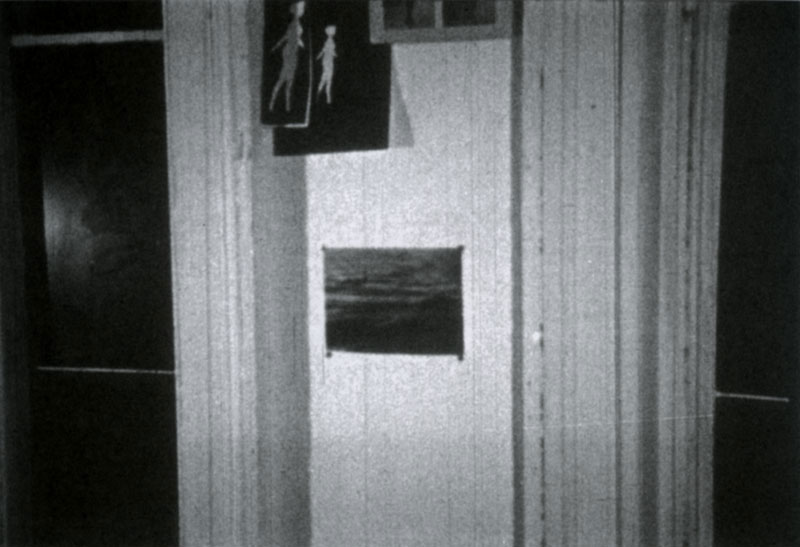 A camera zooms across the length of an 80-foot urban loft, beginning from a distance approximating the camera’s fixed. Position — where most of the room is visible — and proceeding towards the four vertical double-windows, three intervening sections of wall space, desk, chairs and radiator on the opposite side, accompanied on the soundtrack by a sine wave gradually progressing from its lowest note (50 cycles per second) to its highest (12,000 cycles per second). The zoom mainly proceeds through a series of periodic jerks, between occasional shot changes, while the images pass through a variety of colored filters, film stocks, and qualities and degrees of processing (positive and negative)and light exposure (controlled by the camera, four light fixtures on the ceiling, and the time of day). It is interrupted four times by a visible human event, and during each of these the sine wave is overlaid with synchronized sound: (1) A woman and two men enter the room, and the former directs the latter to set a bookshelf down against the wall on screen left; all three leave. (2) Two women appear; one closes a central window while the other turns on the radio (“Strawberry Fields Forever” is heard); the radio is subsequently turned off and both women exit. (3) The sounds of glass splintering, a door being forced open and footsteps approaching on the stairs are heard off-screen; eventually a man staggers into the frame and drops dead on the floor, shortly before the zoom bypasses his body and eliminates him from the image. (4) A woman steps over to the desk, dials a number on the phone, and speaks to a man named Richard: “. . . I just got here. There’s a man lying here., and I think he’s dead . . . I’m frightened …All right, I’ll wait downstairs”. After she leaves, superimposed images of her phone conversation and other earlier stages of the camera’s journey appear over the zoom’s progress, which is gradually zeroing in on the lowest of three small photographs posted on the central wall section: a picture of sea waves. As this photograph begins to assume the same dimensions as the screen, a police siren is heard, gradually merging indistinguishably with the sine wave; the zoom continues beyond the borders of the photograph, then retreats a few feet, and the image blurs out. 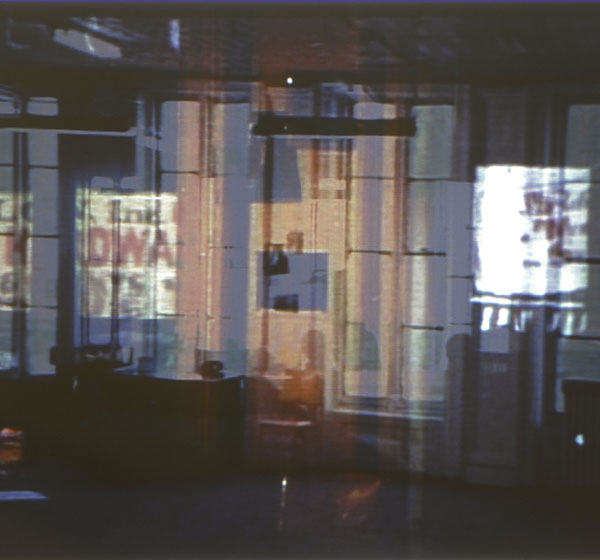 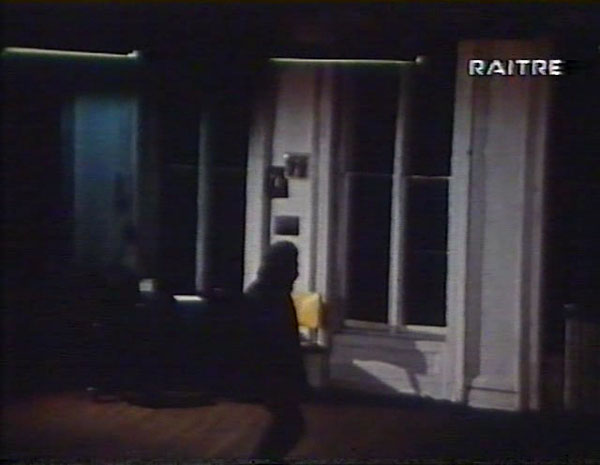 If Wavelength both contains and largely comprises what might be construed as the most consequential zoom shot in the history of cinema, this is because it radically redefines not only the functions that such a shot might have, but also –- and perhaps more importantly — the field of potential interest that almost any representational shot of any film could have. With its rigorous, relentless and wholly functional logic, Wavelength proposes like few films before it a model of cinema as perceptual and philosophical investigation, and is witty and sensible enough about its own aim to phrase its journey partially within the contextual framework of a mystery thriller. From the beginning, suspenseful questions are implicitly raised — chiefly about where the zoom is ultimately heading, and why — and as the field progressively narrows, paring away false leads and gradually revealing more potent clues (i.e., the photographs on the far wall and what they contain), a thoroughgoing education about the ramifications of these questions is being conducted. While changes of light, color, texture, sound and visual field individually and collectively transform our grasp of the room and its immediate environs (such as the traffic noises, awnings and signs from the street below), the implacable physicality and presence of the setting is paradoxically being reaffirmed; even though the lighting tends to highlight different objects (chairs, bookshelf, desk, radiator) at different times of day, so that the room itself is undergoing a continual shift in balances and stresses, the virtually uninterrupted penetration of space, defining our journey across the room as narrative, is concurrently reasserting that room as the ‘hero’ of the plot. (“If a room could speak about itself,” Manny Farber has noted in a brilliant analysis of the film, “this would be the way it would go”.) It is a hero that we come to know only gradually.

We might not happen to observe a slip of paper lying on the desk, for example, until after the mysterious intruder enters to drop dead on the floor, and the zoom coolly leaves him behind in its unswerving trajectory. And at roughly the same time that the camera eye is hurrying past the corpse — thereby emphasizing the relative permanence of the room itself — it is also cutting off our remaining view of the single window on the right of the screen, another potential distraction or ‘escape’ from the narrative’s ultimate destination.

Indeed, the windows play a crucial role throughout the film until the camera bypasses them (and the photograph of the sea assumes and then extends a comparable function once they are gone), alternately suggesting ‘containers’ of the world outside — metaphorical eyes in their own right — and blank or blinkered surfaces, when we glimpse only blackness through them, which tends to accent the skeletal structure of the rest of the room. The perspectives possible in a flat surface — movie screen, window or photograph — are the central issues here, and the ‘resolution’ of the mystery in a sea vista gracefully dovetails the film’s pursuit of the finite into a suggestion of the infinite. But Snow has defined the process much more succinctly himself, in various statements: “A pun on the room length zoom to the photo of waves (sea), through the light waves and on the sound waves” (Cinim #3). “The space starts at the camera’s (spectator’s) eye, is in the air, then is on the screen, then is within the screen (the mind).” (Film Culture #46). The continuities established between the four ‘human events’ and the discontinuities that these events engender in the room’s exploration serve to illuminate everything else, just as the rare flashes of pure colors — the only instants in the film when the room or some part of it is not seen — modify our perceptions of these colors when they figure elsewhere.

The epoch-making fascination of Wavelength is that it explicitly makes ‘everything’ interesting, transforming every discernible element in its path into an object of significance. It seems ironic, if understandable, that many spectators shy away from its experience as being ‘too long’ or containing ‘too little’, when its primary obstacle is in fact the intimidating richness of what it has to offer. It surely is less than accidental that, mutatis mutandis, Tati’s Playtime has met with precisely the same objections, and for roughly comparable reasons. Redirecting our attentions while expanding the-possibilities of just what ‘subject matter’ on a screen entails, each filmmaker is presenting the public with a feast for the gods that will take mere mortals (and most moviegoers) a number of years to taste and chew properly, much less digest. In the meantime, for an open mind attached to equally open eyes and ears, it provides an intoxicating adventure. 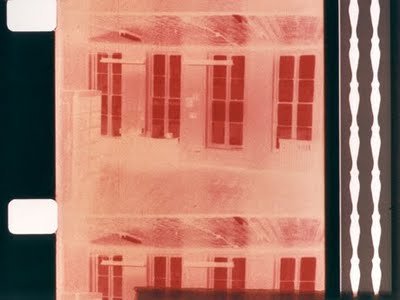