This article was written in 2006 — specifically at the request of Ghatak’s son Ritaban, whom I met at the Jeonju International Film Festival in South Korea in the spring of that year. I was serving on one of the festival’s juries and also lectured with Ritaban at a screening of The Cloud-Capped Star during a Ghatak retrospective. Ritaban was then planning a critical collection about his father’s work, as a kind of follow-up to a collection of his father’s writings about cinema (Rows and Rows of Fences, published by Seagull Books in Calcutta in 2000) and asked me to contribute an article to it. But once I emailed this piece to him about half a year later, I never heard from him again, leading me to conclude that the critical collection project was suspended. So eventually I submitted this to my friend Adrian Martin, coeditor of the online Rouge, who published this in their 10th issue in 2007, about a year later. — J.R. 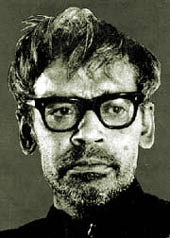 I have no way of knowing if Ghatak ever saw Jacques Tati’s 1953 masterpiece Mr. Hulot’s Holiday, but when I look at his second feature, Ajantrik (1958), it’s hard not to be reminded of it. Tati discovered with that film—while introducing his most famous character, Hulot, who went on to appear in his next three features (Mon Oncle, Playtime, and Trafic)-–-that he didn’t even have to appear onscreen every time he wanted Hulot to be evoked. All he had to do was duplicate the sound of Hulot’s car—a rattling antique and an embarrassment that very early on in the picture becomes closely associated with him, identifying him from the outset as the odd man out among vacationers at a summertime beach resort. 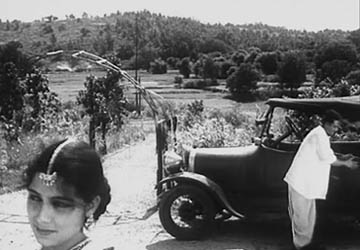 There’s a similar association made between Bimal (Kali Banerjee), the cab-driver hero of Ajantrik, and his own broken-down car. The fact that this car has a name, Jagaddhal, and is even included in some rundowns of the film’s cast, also seems emblematic of this special symbiosis. And it’s interesting that Ghatak also uses some artificial-sounding noises on the film’s soundtrack that oddly evoke science fiction, as if to express his fascination, his bemusement and amusement, with Bimal talking to and more generally treating his 1920 Chevrolet as if it were both a living creature and an extension of his own personality. (In interviews, Ghatak stated that he spent many years thinking about the philosophical implications of this relation between man and machine—–a relation that seems especially pertinent to the technology of film itself.) And offscreen as well as onscreen, the various sounds that Ghatak uses to characterize this vehicle through various stages of health and fitness are a major aspect of this film’s tragicomic tone—–as important as the music, or the sound of Bimal’s weeping when Jagaddal finally and irrevocably breaks down. The sound of this wreck being pulled away in the final scene is especially harsh and poignant, yet the sound of the detached car horn still wheezing and honking when an infant squeezes it allows the hero some sense of triumph and joy in the film’s final shot.

In short, we have to acknowledge that the sound of this picture is far more than a neutral accompaniment to and counterpart of the images. And more generally, when we consider the soundtracks of some of Ghatak’s other features, such as The Cloud-Capped Star (1960), it is tempting to imagine that Ghatak in effect created these features at least twice—–once when he shot them, and then once again when he created their soundtracks. 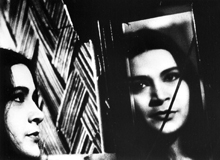 On the British Film Institute’s DVD of this film, there is a detailed introduction by the former Guardian film critic Derek Malcolm that puts much emphasis on its sound. Although Malcolm speaks of the film having an innovative use of “natural sound,” which I rightly or wrongly interpret as “direct sound,” I’ve been told by Ghatak’s son Ritaban that none of his father’s films employ direct sound and that all of them, by technical necessity, are post-dubbed. But this latter fact only emphasizes the degree to which Ghatak’s soundtracks are composed, and what I find most striking about his highly unorthodox methods of sound composition are the ways that they essentially “rethink” the dramaturgy of the visuals, and affect the ways that we look at these visuals by drawing our attention towards certain details and away from certain others.

This principle is facilitated by the way that Ghatak seems to compose both his visual mise en scène and his aural mise en scène in discrete layers. He frequently employs deep focus cinematography, permitting a certain counterpoint between background and foreground details that on occasion reminds me of the early films of Orson Welles. (The last time I saw The Cloud-Capped Star, at the Ghatak retrospective held at the Jeonju International Film Festival in South Korea, I was especially struck by certain similarities to Welles’ second feature, The Magnificent Ambersons—–another tragic portrayal of the shifting fortunes of a family set against a larger backdrop of a culture in relentless decline, with a great deal of emphasis placed on the sacrifices made by some of the family members.) And Ghatak’s sound is often layered between music, dialogue, and sound effects that can be naturalistic (such as the sound of food cooking on a grill, which Malcolm mentions) or expressionistic (such as the recurring sound of a cracked whip, which Malcolm also mentions). Much as our visual attention can shift in certain shots from foreground to background and back again because of the construction of the layered images, our aural attention might shift at times between music, dialogue, and sound effects, which might in turn affect the direction of our gaze in relation to those images.

There are two basic ways that a filmmaker can relate to film history: to work within an existing tradition or to proceed more radically as if no one else has ever made a film before. I think it would be safe to say that at least 99% of the films we see in theaters are made according to the first way. The Danish narrative filmmaker Carl Dreyer and the American experimental filmmaker Stan Brakhage are two of the rare exceptions who might be said to have followed the second way. Even though they too both worked to some extent in existing traditions, their principles of editing and camera movement and tempo and visual texture are sufficiently different to require viewers to move beyond some of their own habits as spectators in order to appreciate fully what these filmmakers are doing artistically. Without making such an effort at adjustment, one’s encounters with the films of Brakhage and Dreyer are likely to be somewhat brutal in their potentiality for disorientation.

Ghatak, I believe, is another rare exception who followed the second route I have described, and one who provides comparable challenges of his own. And his methods of composing soundtracks for his films as well as his ways of interrelating his sounds and images are among the things I would point to first in order to describe his uniqueness as a filmmaker. One might conclude, in other words, that he reinvented the cinema for his own purposes both conceptually, in terms of his overall working methods, and practically, by rethinking the nature of certain shots he has already filmed—–specifically, by starting and/or stopping certain kinds of sounds at unexpected moments, sometimes creating highly unorthodox ruptures in mood and tone.

It might be argued that these ruptures were not necessarily intentional. At least I’ve found no acknowledgment of them or of many of Ghatak’s other eccentric filmmaking practices in his lectures and essays such as “Experimental Cinema,” “Experimental Cinema and I,” and “Sound in Cinema,” all collected in Rows and Rows of Fences: Ritwik Ghatak on Cinema (Calcutta: Seagull, 2000). But by the same token, I find little if any acknowledgment by Carl Dreyer of his unorthodox editing practices in his own writings. And the issue of artistic intentionality remains a worrisome one in any case, because artists aren’t invariably the best people to consult about their own practices, and it can be argued that what artists do is far more important (at least in most cases) than what they say they do. And the radical effect of Ghatak’s ruptures in his soundtracks strike me as being far better illustrations of his manner of reinventing cinema than any of his theoretical statements. To put it as succinctly as possible, they reinvent cinema precisely by reinventing us as spectators, on a moment-to-moment basis, keeping us far more alert than any conventional soundtrack would. And this makes them moments of creation in the purest sense.