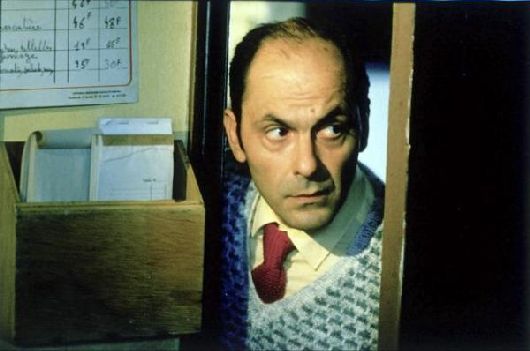 Foreign-film distribution in this country often operates on the brand-name principle — as is apparent with Un air de famille (1996), playing at the Music Box this week. Director and cowriter Cedric Klapisch had considerable commercial success here with his third picture, the 1995 When the Cat’s Away (this one is his fourth). I haven’t seen Klapisch’s first two; what I know about him mainly is that he received a degree from New York University’s graduate film school and worked as a director of photography on a dozen short films in New York before returning to France to make his own films.

When the Cat’s Away is an intelligent enough movie, but the adjectives I’d apply to it are “charming” and “slight”; Un air de famille, which I like a good deal more, is neither. The most significant aspect of the film is the couple, Agnes Jaoui and Jean-Pierre Bacri, who wrote the very successful play on which it’s based. They also adapted the script for the screen, with Klapisch’s help, and play two of the leading roles, a sister and brother in a very troubled family — parts they originated on the stage, as the four other actors in the film did.

Jaoui and Bacri are hot names in France right now because of their work as playwrights, screenwriters, and actors. (Their only previous play as a team, Cuisine et dependances, was also made into a film, in 1993.) But they aren’t yet known in the United States because the three other films for which they’re famous in France — all of them directed by Alain Resnais — remain unseen here (though the third is showing at the New York Film Festival this month). The first two are “twin” features called Smoking and No Smoking (both 1993), adapted by Bacri and Jaoui from Alan Ayckbourn’s eight-part cycle of plays, Intimate Exchanges. Designed to be performed over two consecutive evenings, the plays feature only two actors who perform multiple roles. The two films can be seen individually or together, are not meant to be shown in any particular order, and are usually programmed separately. Bacri and Jaoui merely adapted Ayckbourn’s work; Pierre Arditi and Sabine Azema, two Resnais standbys who have played in five of his last six features, performed in the two films.

The third Resnais feature is On connait la chanson (“Same Old Song,” 1997). It not only has an original script by Bacri and Jaoui, they also figure in the cast (along with Arditi and Azema). And it’s by far Renais’ biggest success in France to date, sweeping the Cesar awards earlier this year.

But the odds of it receiving American distribution are almost nil: like Smoking and No Smoking, it’s regarded as “too French.” In some ways this is paradoxical because On connait la chanson is an eccentric musical inspired by the work of the late Dennis Potter, the Englishman who wrote Pennies From Heaven and The Singing Detective. One might well wonder how movies inspired by English authors Ayckbourn and Potter could be “too French” for Anglo-American audiences. But having seen all three features, I can understand the cultural barriers these films raise, though they’re not quite the same in the two projects. Smoking and No Smoking are highly stylized, artificial comedies each pivoting around the outcome of an English wife’s decision to smoke a single cigarette or not after she’s decided to quit. Though to a French audience the comic-book theatrical and behavioral styles of both features are “typically English,” to English and American spectators they’re more likely to look like events taking place on the moon. On connait la chanson, on the other hand, depends on a familiar knowledge of past and present French culture — the characters lip-synch snatches of old French songs, and the plot reflects contemporary French life. The result is the same, however: most English and American spectators will likely be left out in the cold.

I too have some of these difficulties with all three features, but I still think they should be seen here. A crippling side effect of Americans’ isolationism is that the mind-sets of foreign cultures are largely factored out of our cultural discourse. Last week in this paper Michael Miner wrote revealingly about the Irish response to the Clinton-Lewinsky-Starr madness: Clinton has played an important role in trying to alleviate Ireland’s internal struggles, a fact most of our commentators are completely indifferent to — as if the significance of Clinton’s fate to the remainder of the world were irrelevant to Americans.

By the same token, films from overseas that don’t reinforce the stereotypical notions we have about other countries are commonly judged uncommercial; any exceptions that leak through deserve to be noted and cherished. If you want a taste of Islamic art and life without the usual sugarcoating — a sense of how the culture looks and feels from the inside — the Iranian feature Birth of a Butterfly, playing twice this weekend at the Film Center, offers a wonderful opportunity. You may be baffled or at least bemused by part of what you see, as beautiful as it is — I was myself. In the same way I was often bemused, but intrigued, by some of the songs and other details in On connait la chanson when I saw a subtitled print in Finland last June. But as we all know confusion plays an essential role, at least initially, in broadening our perspectives: we usually have to confront what we don’t know before we can begin to learn anything new.

Un air de famille, I hasten to add, presents none of these difficulties; it’s a gripping, completely comprehensible family drama that doesn’t offer any real challenges to our usual understanding of contemporary French life. This doesn’t necessarily mean that it has less to say about that life than On connait la chanson, only that what it has to say is more compatible with what we already know. And together these two movies suggest that the Bacri-Jaoui team have their fingers on the pulse of what’s happening in France. However, the parallels that could be drawn to American comic teams like Adolph Comden/Betty Green and Garson Kanin/Ruth Gordon may not be particularly useful: such comparisons don’t so much clarify as obscure the specific talents of each couple. For one thing, as Bacri has noted, he and Jaoui are actors who write rather than writers who act, and they both agree that she’s stronger on plot construction, whereas he’s better at dialogue. And from the evidence of Un air de famille, they’re even more impressive as actors than they are as writers. 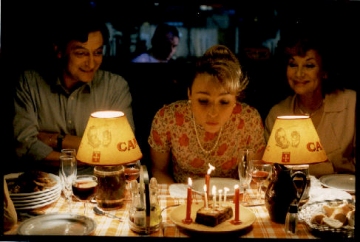 Though it doesn’t quite unfold in real time, Un air de famille (which can be translated as “A Family Resemblance” or “Family Resemblances”) chronicles events transpiring over about four hours in 107 minutes. The occasion is a Friday-night family gathering at one brother’s somewhat run-down cafe in a semirural corner of France. The cafe is called Au pere tranquille, which roughly translates as “at the place of the tranquil father,” but the allegedly tranquil father, who originally ran the establishment, is one of the film’s structuring absences. We’re eventually told that the mother left him years ago, but what exactly happened to him is never clarified. The cafe is presently run by Henri (Bacri); his kid sister Betty (Jaoui) lives nearby: she’s about 30 and is trying to end a secret affair with Henri’s waiter Denis (Jean-Pierre Darroussin). The other son–the mother’s favorite and the only child in the family who’s regarded as successful — is Philippe (Wladimir Yordanoff), an executive in the number-four slot at a large company called Hexatec that’s promising to bring jobs and prosperity to the region, making it “the Silicon Valley of France.” As the film opens, we see Philippe on local TV making these promises, a broadcast that Betty sees but that Henri forgets to watch.

Shortly afterward, Betty turns up at the cafe and tells Denis that she wants to end their relationship; then she has a brief conversation with Henri, who decides to lie to Philippe about missing his TV appearance. Not long after that, Philippe arrives with their mother (Claire Maurier) and his wife, Yolande (Catherine Frot), whose birthday they’re celebrating tonight. There are only two other figures of any consequence. One is Henri’s wife, Arlette — another structuring absence — who fails to make an appearance because, as we discover a little later, she’s recently left Henri for a trial separation. The other is the arthritic family dog, Caruso, who’s present but paralyzed from the neck down and receives more love from the mother than any of her children do: Philippe is second in her affections, Betty third, and Henri fourth. As we gradually discover, pecking orders are extremely important to this family; when Philippe wants to learn from his Hexatec colleagues how his TV appearance went, the only one he feels comfortable phoning is the number-five executive.

Filmed in ‘Scope on a very realistic set, Un air de famille feels like a play throughout. Yet apart from two brief, clunky flashbacks to the three kids waking their parents one morning — both probably used to bridge the play’s original division into three acts — and some awkward uses of music in these passages and elsewhere, Klapisch’s mobile adaptation of the work to the screen is very intelligently carried out in terms of time as well as space (opening out the play are a few brief forays into the surrounding neighborhood). Filming the action in ‘Scope is Klapisch’s real masterstroke, however: it gives him space to negotiate the characters’ various groupings and separations.

The story is constructed so that each of the five family members is gradually unveiled in relation to the others as well as to Denis: Klapisch keeps surprising us and shifting our emotional alliances around. Bacri’s Henri initially comes across as a tyrannical, ill-tempered, unreasoning male chauvinist, while Jaoui’s Betty registers as a lucid free spirit. But then the “family resemblances” that shape our initial impressions are further spelled out, compelling us to realize that these characters are more complex and contradictory than we thought.

As for Denis, his outsider status prompts us to share his vantage point. Yolande — the “number two” outsider in the pecking order of our alliances — seems more remote than the other characters at first, but she, like Denis, undergoes significant changes in our perceptions. (Darroussin and Frot received Cesars last year for best supporting actor and best supporting actress; Bacri, Jaoui, and Klapisch received one for best screenplay.) At first Denis, a bookworm, seems astute about the family, while Yolande is almost a caricature of the spoiled bourgeois wife. But thanks to the screenwriters’ well-honed dramaturgy and Klapisch’s warm feeling for people — the quality that most connects this movie with When the Cat’s Away — these traits are eventually superseded by others even more relevant. Only the mother and Caruso fail to benefit from this process of three-dimensional development and enhancement, perhaps because she’s the villain and he’s a theatrical prop; within the story proper, both are victims of paralysis and stasis. 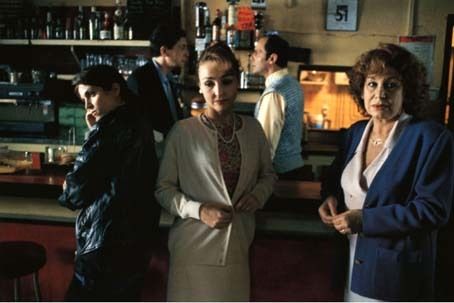