From Cinematograph, vol. 4, 1991; reprinted in both Placing Movies: The Practice of Film Criticism and Discovering Orson Welles. — J.R. 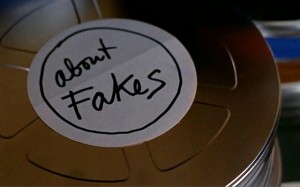 I want to give the audience a hint of a scene. No more than that. Give them too much and they won’t contribute anything themselves. Give them just a suggestion and you get them working with you. That’s what gives the theatre meaning: when it becomes a social act.

1. One of the most progressive forms of cinema is the film in which fiction and nonfiction merge, trade places, become interchangeable.

2. One of the most reactionary forms of cinema is the film in which fiction and nonfiction merge, trade places, become interchangeable.

How can both of these statements be true — as, in fact, I believe they are? In the final analysis, the issue is an ethical one. In support of 2, there are docudramas that use spurious means to grant bogus authenticity to fiction (MISSISSIPPI BURNING is a good example), and documentaries that employ fictional devices in order to lie more effectively (e.g., the studio retakes in Leni Riefenstahl’s TRIUMPH OF THE WILL, which are well documented in Albert Speer’s Inside the Third Reich).… Read more »

Once It Was Fire: Introduction to a Straub-Huillet Retrospective (1982)

Prior to the recently held retrospectives devoted to Jean-Marie Straub and the late Danièle Huillet, the only previous such retrospective was held on November 2-14, 1982, at New York’s Public Theater. I curated this event, which also included a selection of films by others made by Jean-Marie and Danièle to show with their own. For the occasion, I also edited a 20-page, tabloid-sized catalogue, long out of print, and what follows are (1) the full program as planned and (2) my introduction. Regarding (1), I recall now that there was one last-minute addition, their recently completed short film En rachâchant (see second photograph below), as well as some last-minute omissions or substitutions that are noted in the text below. Regarding (2), I should emphasize that a lot has changed and developed over the past three decades, both in myself and in Straub-Huillet’s work –- in both cases, I’d like to think, for the better. It’s cheering to note that no less than three very substantial books have appeared over the past several months devoted to their work, two in English  — their Writings (as translated and edited by Sally Shafto, published in New York by Sequence Press), and an excellent critical collection edited by Ted Fendt for the Austrian Filmmuseum — and a mammoth collection in French, Internationale Straubienne, published jointly by Editions de l’Oeil and the Centre Pompidou (to accompany their own retrospective, which may be still in progress).… Read more »