From the Chicago Reader (September 27, 1991). This film is now available on a Criterion Blu-Ray. Although I still have some issues with the film, after reseeing it on this edition, Terry Gilliam’s audio commentary is terrific, and his own enthusiasm for the film is often compelling. — J.R.

Terry Gilliam’s elephantine yet breezy The Fisher King is a gripping new-age extravaganza, visually splendid and adroitly paced. But some gross conceptual cheating — presumably the fallout of commercial ambitions — makes the film a little hard to swallow. Gilliam’s fifth feature (he also directed Jabberwocky, Time Bandits, Brazil, and The Adventures of Baron Munchausen) revels in duality — everything comes in twos — so it’s little wonder it indulges in both duplicity and outright doublethink; the film is also littered with internal “rhymes,” both significant and gratuitous. This duality may come partly from the fact that for the first time Gilliam has not written the script himself — it’s by talented newcomer Richard LaGravenese. At any rate the duality echoes Gilliam’s well-advertised desire to make this both an artistic and commercial success — to prove he can turn out a money-maker (after the box-office flop of Baron Munchausen) and yet retain his reputation as an overachiever in the grand style, a director known for his quirky humor and ravishing visual conceits.… Read more » 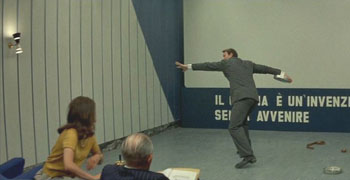 Almost exactly 33 years ago, in October 1964, the critical reception of Jean-Luc Godard’s widest American release of his career and his most expensive picture to date was overwhelmingly negative. But now that Contempt, showing this week at the Music Box, is being rereleased as an art film — in a brand-new print that’s three minutes longer — the critical responses have been almost as overwhelmingly positive. It’s tempting to say in explanation that we’re more sophisticated in 1997 than we were in 1964 — that we’ve absorbed or at least caught up with some of Godard’s innovations — but I don’t think this adequately or even correctly accounts for the difference in critical response. Despite all the current reviews that treat Le mépris as if it were some form of serene classical art, it’s every bit as transgressive now as it was when it first appeared, and maybe more so. But because it’s being packaged as an art movie rather than a mainstream release — because Godard is a venerable master of 66 rather than an unruly upstart of 33 — we have different expectations.… Read more »