A reprint from the Taipei Times (October 13, 2014), with different illustrations. For the record, I don’t think it was betel nuts that I was chewing at Hou’s 1991 party; what I recall was a kind of barklike Taiwanese form of speed. — J.R.

The year was 1991. American film critic Jonathan Rosenbaum was experiencing his first authentic night out in Taipei at a late night karaoke party hosted by renowned Taiwanese film director Hou Hsiao-Hsien (侯孝賢). Fueled by bottles of cognac and a generous supply of betel nuts, the duo belted out Beatles songs until 3am before stumbling home.

Having reviewed Dust in the Wind (戀戀風塵, 1986) and A City of Sadness (悲情城市, 1989) for the Chicago Reader, long-time film critic Rosenbaum was no stranger to Hou’s work. But being in Taipei for the Asia-Pacific Film Festival gave him a better appreciation of the local culture, history and setting.

“I was able to spend my 19 days there less as a tourist than as a part of everyday life in Taipei,” said Rosenbaum, who was in New York this past week for the retrospective “Also Like Life: The Films of Hou Hsiao-hsien” at the Museum of the Moving Image.… Read more » 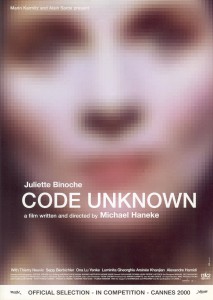 Aptly subtitled “Incomplete Tales of Several Journeys,” the fifth feature by Austrian director Michael Haneke (2000, 117 min.), his best to date, is a procession of long virtuoso takes that typically begin and end in the middle of actions or sentences, constituting not only an interactive jigsaw puzzle but a thrilling narrative experiment comparable to Alain Resnais’ Je t’aime, je t’aime, Jacques Rivette’s Out 1, and Rob Tregenza’s Talking to Strangers. The film’s second episode is a nine-minute street scene involving an altercation between an actress (Juliette Binoche in a powerful performance), her boyfriend’s younger brother, an African music teacher who works with deaf-mute students, and a woman beggar from Romania; the other episodes effect a kind of narrative dispersal of these characters and some of their relatives across time and space. I couldn’t always keep up with what was happening, but I was never bored, and the questions raised reflect the mysteries of everyday life. This is Haneke’s first feature made in France, and the title refers to the pass codes used to enter houses and apartment buildings in Paris — a metaphor for codes that might crack certain global and ethical issues.… Read more »