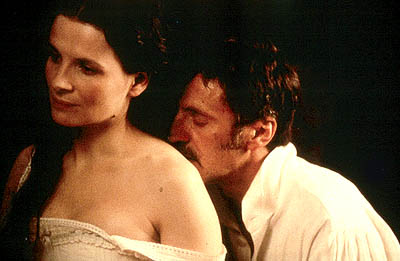 The Widow of Saint-Pierre

I find that some movies change more than others over repeated viewings, and after three screenings Patrice Leconte’s The Widow of Saint-Pierre slid all the way from near masterpiece to effective piece of distraction. I saw it three times only out of professional duty — after seeing it at a press screening several weeks ago, I led two discussions about it for the “Talk Cinema” film series. I would have been happier seeing it only once, and if you don’t intend to spend a lot of time reflecting on it afterward, The Widow of Saint-Pierre could add up to one good evening.

That may sound condescending, but some moviegoers — including, on occasion, myself — have the attitude that “I don’t like to think when I go to movies; I want to have fun.” It’s depressing that there are people who are willing to say they can’t have fun while they’re thinking — that is, if they’re telling the truth, since I suspect some of them are fibbing, even if they don’t know it. This attitude is curiously prevalent in this country, and I wonder if it’s partly because we have so many lousy teachers in our educational system that they give us a perverse impression of what it means to be intellectual.

In any case, no one ought to assume that the only nonintellectual movies out there are the ones without subtitles. The recent smash success of Crouching Tiger, Hidden Dragon might open the door to some of the better entertainments from around the world, which deserve to be shown at the mall alongside Someone Like You. The Widow of Saint-Pierre, which opens this weekend at the Music Box, will probably be associated more with art or culture than with entertainment, chiefly because it’s in French with subtitles and it takes place during the mid-19th century. Yet its intellectual content isn’t any higher than that of Erin Brockovich or Traffic. Like those films, it’s stunted by the star system it’s built around. Here Juliette Binoche and Daniel Auteuil — like Julia Roberts, Michael Douglas, and Ashley Judd — are used to distract us from whatever anomalies, contradictions, and inconsistencies the movie decides to sling at us.

The story, which is partially based on court records, is set during the French Second Republic on Saint Pierre, a French island off the coast of Newfoundland. Two drunken fishermen argue endlessly about whether their former captain is gras (fat) or gros (big), go to his cabin for fun and games, and wind up knifing him to death. The man who wielded the knife, Neel Auguste (played by the great Sarajevan film director Emir Kusturica, coaxed into acting by Leconte), is sentenced to be guillotined; his friend gets off with hard labor but is killed in an accident en route to the prison.

It turns out that the island has neither a guillotine nor an executioner, and the governor (Michel Duchaussoy) insists on ordering a guillotine from overseas, hoping to find an executioner in the interim. Meanwhile he places Auguste in the custody of a military captain (Daniel Auteuil) who has only recently arrived on the island. The captain’s humanitarian wife (Juliette Binoche) proposes that Auguste be let out of his cell to help her build a greenhouse, and her devoted and supportive husband immediately agrees, though this predictably winds up scandalizing the governor and the judge. Over the next several months, Auguste becomes a valued member of the local community; he even winds up with a wife and child. But the governor, still awaiting the arrival of the guillotine, has no intention of commuting his death sentence. (Incidentally, the French word for “widow” is slang for “guillotine,” so the title works more than one way.)

These are the bare bones of the film’s narrative setup, which becomes a potent and persuasive plea against capital punishment. But they give little sense of the physical passion between the captain and his wife (neither of whom is ever identified by name, though the wife is referred to as “Madame La”), their total dedication to each other, or their isolation from the surrounding community — which are every bit as important to the film, perhaps even more important insofar as Auteuil and Binoche are the stars (Binoche is a good deal more vibrant here than she is in the self-congratulatory nonsense of Chocolat). Vague hints are dropped that their characters left France under some sort of shadow, and a lot of attention is given to the captain’s horse, which arrives on a ship around the same time as the murder trial and seems to symbolize freedom to him. But nothing solid comes of either plot strand, just as nothing comes of the suggestion that Madame La’s passion for social justice may spice up her marriage in some fashion.

On his TV show with Roger Ebert, Richard Roeper objected to the film’s stand against capital punishment, complaining that we get no sense of what repercussions the murder has in the community. I’m not sure how he failed to notice the angry crowd who precipitate the accident that kills the second fisherman as he’s being taken to prison, but it is true that the movie stacks the deck in Auguste’s favor and displays no curiosity about the murder victim — a form of indirect dramatic expediency that’s also evident in the way the film shows us the murder only as a flashback during Auguste’s trial and reveals the verdict only when a boy delivers the news to the local tavern. Yet if one believes, as I do, that capital punishment is both barbaric and ineffectual as a deterrent against crime, then the deck stacking is no more objectionable than the casting of big stars to play the sexy leads. In fact, it’s a strategy that evokes Steven Spielberg at his canniest, as it hones in on a story and an emotional tone without the distraction of thought.

From time to time, The Widow of Saint-Pierre, like Spielberg’s movies, creates the illusion that it’s fostering consideration of an important issue. But Leconte — working as his own cameraman, as he customarily does, and favoring flurries of movement shot with a handheld camera to indicate his own feelings — sometimes prefers to muddle whatever issues Claude Faraldo’s screenplay raises. He opts for pure emotive responses, while offering attractive visuals — the lighting of interiors throughout is exquisite — to distract us from asking too many questions about the characters. Less forgivably, he allows Auguste to remain a cipher, thereby undercutting any nuanced reflection on his situation; perhaps this is a consequence of the overarching class bias of the film as it focuses on the two leads and their bourgeois comforts, virtually guaranteeing that we identify almost exclusively with them and distancing us from Auguste — and everyone else. Leconte certainly has the skill to hold us, but only if we refuse to think too much.