How film history gets rewritten 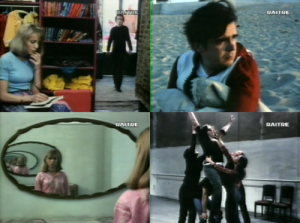 I realize it must sound crazy for people who haven’t seen Jacques Rivette’s 750-minute  Out 1 (1971) or his 255-minute Out 1: Spectre (1972) to keep reading blog posts about them — even though I keep hearing almost every day from various others who have seen either or both films recently, in Chicago or New York or Vancouver or Berkeley, and are still recovering from the experience.

What I’d like to focus on here is how these films wind up getting misrepresented due to the circulation of incomplete data. For instance, everyone who’s seen any stills from the two films and hasn’t seen the films probably concludes that they’re both in black and white. They’re wrong; the problem is that the only photos available from the films on the Internet and in film magazines are in black and white, undoubtedly because color stills would cost too much money to process. In fact, the beautiful restoration of Spectre that showed at the Gene Siskel Film Center last Saturday, blown up from 16-millimeter to 35, had far more luscious and luminous colors than any other print I’ve ever seen — finally justifying Rivette’s supposedly extravagant claim in a 1975 interview that “you might almost say that I am trying to bring back the old MGM Technicolor! I even think that the colors of Out would please a Natalie Kalmus.”

I should add that I’ve probably seen Spectre a good eight or nine times by now. This is partly because I was living in Paris about two blocks away from a cinema showing it for a week-long run in 1973. I was writing about the film at the time for Sight and Sound, and given my far from perfect French, the only way I could assure myself I was understanding most of the dialogue was by going back repeatedly and taking detailed notes. And of course the fact that the film offers itself as a kind of diabolical puzzle only intensified my burning curiosity about its many mysteries.

All of which leads me to my major point. Thanks to both my prolonged immersion in the film and an interview I did with Rivette during the same period, I can state without hesitation that a major aspect of the film’s structure is clarified by the placement of the film’s intermission exactly halfway through, e.g., a little over two hours into the film. Up to this point Rivette has been intercutting between four mainly autonomous plots that have only gradually started to link up, involving two separate theater groups and two lonely, solitary, and eccentric individuals played by Jean-Pierre Leaud and Juliet Berto (decked out in a wig in the accompanying still, supposedly to make herself look like a gangster, with Francoise Fabian to her left). Then, immediately before the intermission, for the first and only time in the film, Leaud and Berto briefly cross paths, at a hippie boutique significantly called L’Angle du Hasard (roughly, “The Angle of Chance”), virtually unaware of each other’s existence — at which point all four of the film’s plots become magically interlinked.

But this is no longer the scene occurring just before the film’s intermission. Similarly, the first sequence after the intermission is no longer an extended sequence of black-and-white stills that either recap the previous plots or anticipate others. Why? Evidently whoever restored the film was unaware this was part of Rivette’s plan, and therefore the 35-millimeter reels were arranged so that the intermission now occurs about five or ten minutes later. So every time the film gets shown today, it gets shown incorrectly, because no projectionist wants to stop a reel before the end, and the grand structure of an already very difficult film gets needlessly obfuscated instead of clarified.

By the same token, the beautiful colors of this restoration, even though they obviously fulfill Rivette’s intentions, don’t really qualify as a “restoration” of anything that audiences were seeing in the mid-1970s. In this case, I’m grateful rather than sorry. But it’s still another case of film history being rewritten. 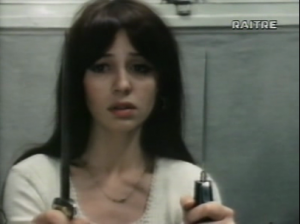