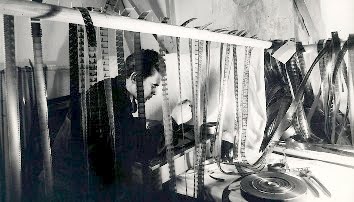 A word of advice to film artists who want to get ahead: don’t move around too much. Film history often gets subsumed under national film history, so filmmakers who keep moving risk getting lost. And stay out of politics, since getting into them invariably puts you on either the winning or the losing side. If you’re on the losing side, many national film histories will write you out entirely; if you’re on the winning side, chances are your film will date faster than last week’s newspaper.

These somber reflections are prompted by what I’ve been able to piece together about the extraordinary career of the Dutch-born leftist documentary and experimental filmmaker Joris Ivens (1898-1989) — who lived in so many places, did so many things, and made so many films he’s come dangerously close to being shut out of history. From the vantage point of America in 2002, I suppose he’d have to be assigned to the losing side, as mainly a mouthpiece for Marxist party lines from the 30s onward, though that would grossly oversimplify his career. Some of the causes he devoted part of his life to, including Stalinist Russia and Maoist China, are now discredited, with good reason, but that doesn’t mean the films he made on their behalf can simply be dismissed or are without interest.… Read more »

I appreciate your evocation of Sept. 11 at the start of your letter—a defining moment for us all—as well as your conflicted thoughts about vigilantism, and how these impact on your movie tastes. For me, there’s no conflict of this kind, because I’m afraid revenge strikes me as something less than an adult aspiration or concern—accounting both for why I think Mandela’s South Africa is far ahead of the United States in this respect and why In the Bedroom, a very well-made film, doesn’t interest me much. (The only moment I recall making my pulse race was when Spacek slapped Tomei.) As you’re the first to point out, Osama Bin Laden is also obsessed with vengeance—though surely not just for “slights against his brand of Islam.” Other beefs might include the deaths of about a million innocent Iraqis (the American Friends Service Committee’s estimate last spring)—collateral damage that Madeleine Albright told us she had no regrets about, despite the fact that it arguably only strengthened Saddam Hussein—as well as many other lethal forms of meddling in the Middle East, some of them slights against both humanity and common sense.… Read more »

One of the most cherished fantasies in the world of movies is that around this time every year we critics are all dying to think about the best films of the past 12 months — as if listmaking represented some particular populist need for consensus rather than the industry’s desire to resell goods that have already been sold to us again and again (or, in this neck of the woods, to presell goods that haven’t arrived yet).

I’ll admit that one list engenders another, and that once the game starts in earnest, every critic wants to be part of the discussion. But consider some of the drawbacks:

(1) Piles of movies getting released at the end of this year in such a manner that critics (and some audience members) don’t even have time to take them in, much less think about them. (Maybe that’s exactly what the studios want–snap judgment is another practice that serves the industry more than the audience.)

(2) Contortions by critics outside New York and Los Angeles who don’t want to come across as rubes and so vote for movies that most of their readers can’t see yet.