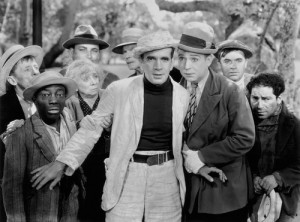 This eccentric and soulful anarcho-leftist fantasy is probably the most underrated of all Depression-era musicals. Directed by Lewis Milestone in 1933 from a script by Ben Hecht and S.N. Behrman, with a score by Rodgers and Hart that features rhyming couplets, the film stars Al Jolson as a Central Park hobo who actually likes being homeless — until he falls in love with an amnesia victim (Madge Evans) who’s a former mistress of the mayor (Frank Morgan) and has to get a job to support her. The overall conception owes something to Chaplin’s 1931 City Lights, but the editing and mise en scene are genuinely inspired and inventive. (The parodic Eisensteinian montage cut to the syllables of “America” must be seen to be believed, and a tracking shot past muttering customers in a spacious bank is equally brilliant and subversive.) Harry Langdon is memorable as a Trotskyite, and Richard Day’s art deco sets are striking. 82 min. 2019 postscript: According to the late Pierre Rissient, much of this film’s brilliance can be credited to the preproduction work on it done by Harry d’Arrast. (JR) 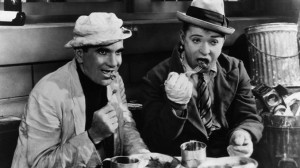 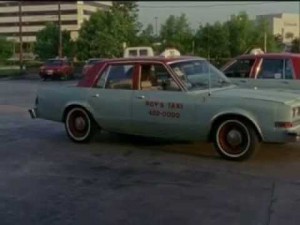 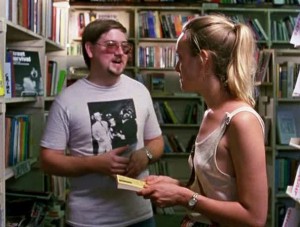 Richard Linklater’s delightfully different and immensely enjoyable first feature takes us on a 24-hour tour of the flaky dropout culture of Austin, Texas; it doesn’t have a continuous plot, but it’s brimming with weird characters and wonderful talk (all of it scripted by Linklater, though it often seems improvised). The structure of dovetailing dialogues calls to mind an extremely laid-back variation on The Phantom of Liberty or Playtime. “Every thought you have fractions off and becomes its own reality,” remarks Linklater himself to a poker faced cabdriver in the first (and in some ways funniest) scene, and the remainder of the movie amply illustrates this notion with its diverse paranoid conspiracy and assassination theorists, serial-killer buffs, musicians, cultists, college students, pontificators, petty criminals, street people, and layabouts (around 90 in all). Even if the movie goes nowhere in terms of narrative and winds up with a somewhat arch conclusion, the highly evocative scenes give an often hilarious sense of the surviving dregs of 60s culture and a superbly localized sense of community. I’ve never been to Austin, but this movie certainly makes me want to pay a visit (1990).… Read more »