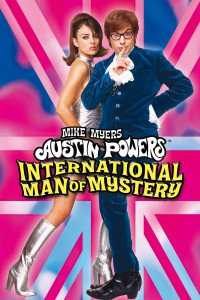 After 30 years of cryogenic preservation, the title hero (a spin-off of James Bond and his clones) and his archenemy Dr. Evil — both played by writer and coproducer Mike Myers (Wayne’s World) — emerge in the present to match wits all over again. What’s really fun about this silly but spirited comedy isn’t just the ribbing of swinging London fashion and social attitudes but the use of the compulsive zooms and split-screen mosaics of commercial movies of the 60s (some of the funniest gags derive from camera placement). There’s a bit of fudging when it comes to the romantic interest: sidekick Elizabeth Hurley initially blanches at Austin Powers’s advances but succumbs as soon as he treats her to a night on the town in Las Vegas, complete with champagne and Burt Bacharach. But 60s (and 50s) icons like Robert Wagner and Michael York (playing someone called Basil Exposition) make this exercise in historical relativity even funnier. Jay Roach directed with just the right amount of period tackiness. With Mimi Rogers, Seth Green, and Fabiana Udenio (as Alotta Fagina). (JR)