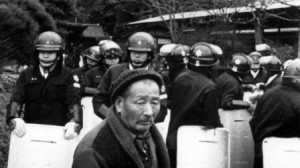 From 1967 to 1974 Japanese documentarian Shinsuke Ogawa lived with the farmers of Sanrizuka, whose village was targeted for demolition to make room for Tokyo’s Narita airport. Supported by radical students, the farmers protested their eviction, and Ogawa joined in, recording both the long-term struggle and the everyday life of the village. His intense involvement eventually yielded five films with a combined running time of about 15 hours; the 146-minute Narita: Heta Village (1973) is the second and final segment included in Doc Films’ retrospective of virtuoso cinematographer Masaki Tamura. Ogawa emphasizes the lifestyle and traditions the farmers are fighting to preserve, and both he and Tamura (a farmer’s grandson himself) show a deep sensitivity and responsiveness to these people. My favorite sequences include an interview with a woman while she slices a radish into the shape of a phallus (which she jokingly attaches to sweet potato “testicles”), a candid and affectionate conversation with an 86-year-old woman seated on her porch, and an opening sequence in which Tamura’s camera roams around a field to illustrate a farmer’s anecdotes. Subjective and highly empathetic, this documentary is less a statement than a friendly conversation: Ogawa can be heard frequently as both narrator and interviewer, the periodic intertitles are no less personal, and the villagers repay the filmmakers’ warmth by freely sharing their lives with the camera. Univ. of Chicago Doc Films, 1212 E. 59th St., Sunday, January 17, 7:00, 773-702-8575.