Do Yourself a Favor [HOUSE OF CARDS]

From the Chicago Reader (July 2, 1993). For all my enthusiasm back then, I can’t remember any of this film now. This is one of the unfortunate side-effects of regular reviewing, which nearly always involves a certain amount of hype (in convincing both readers and one’s self that this week’s offerings are important and notable) and a certain amount of forgetting (that you both went through the same song and dance a week ago).  – J.R. 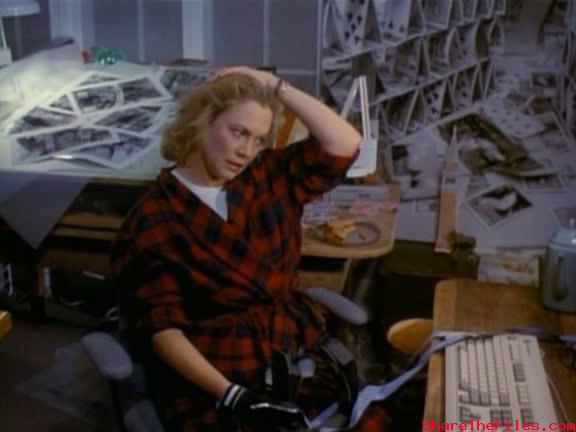 Directed and written by Michael Lessac 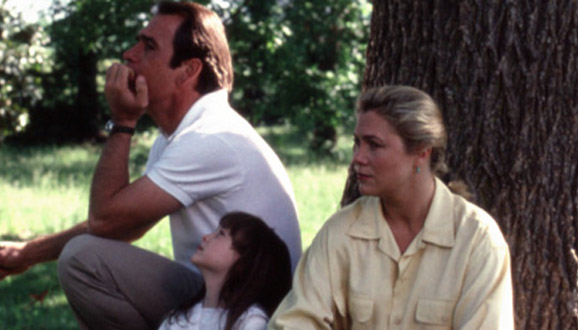 If one of the surest signs of story-telling talent is the capacity to put across an outlandish plot, the first feature of writer-director Michael Lessac is impressive — riveting, exciting, and oddly believable on its own provocative terms throughout. On the page, however, it may sound contrived and pretentious, bordering on some new-age brand of science fiction. So if you want a story that unfolds with all the dramatic force and internal logic needed to compel suspension of disbelief, go see House of Cards before you hear very much more about it, including what I have to say below. I don’t give away all of the plot, but the film does a much better job than I could hope to of laying out its agenda; at best I can only explain part of why it works as well as it does.

Films of ideas — whether they’re mainstream or art movies — are far from fashionable, even when the ideas are dramatically integrated, as they are here. The virtues of concentration tend to be equally ignored, though they go a long way toward explaining what separates the genius of Carl Dreyer, Jacques Tati, and Erich von Stroheim from the mere talent of Ingmar Bergman, Woody Allen, and Martin Scorsese.

I don’t mean to imply by this that House of Cards is in any way a work of genius, only that its dramatic concentration in relation to its ideas is what makes it work so well on its own terms. By concentration I mean focus rather than brevity — the capacity to stick to a single set of concerns from beginning to end, which Stroheim had even when he turned out movies that were eight or ten hours long. From what we know of Stroheim’s long versions of Foolish Wives (1922) and Greed (1925), they were devoid of digressions, unlike 99 percent of movies made then or now.

Sometimes this kind of concentration derives from obsession, and sometimes it comes from craft. In this movie it seems to stem from both. I strongly suspect that part of its distinction in terms of craft derives from the unusual skills of its editor, Walter Murch, who edited most of the major works of Francis Ford Coppola (including all three Godfathers, The Conversation, and Apocalypse Now) and of George Lucas (THX-1138, which Murch also cowrote, and American Graffiti).

When the movie opens, six-year-old Sally Matthews (Asha Menina) is living in Mexico with her parents, both architects, and her older brother Michael (Shiloh Strong). She’s befriended by an old Indian archaeologist (Joaquin Martinez) who steeps her in Mayan folklore, and after her father dies in an accident a passing remark of this friend makes her conclude that her father has gone away to live on the moon. (All this information is imparted impressionistically, but succinctly and effectively, in the film’s opening minutes; as a consequence we never become acquainted with Sally’s father, a good example of the film’s capacity to pare away inessential material.)

Returning home with her mother Ruth (Kathleen Turner) and brother to North Carolina and apparently guided by another passing remark of the archaeologist — “It is easier to see without words” — Sally ceases to speak. Around the same time, as if in a trance, she calmly climbs onto the roof of her house and crosses it with perfect balance to retrieve her brother’s toy airplane. She also climbs a tree at school, unexpectedly catches her brother’s softball, and exhibits other signs of unusual alertness and coordination. Yet she also periodically falls into a kind of autistic panic — emitting eerie short, rhythmic shrieks — when her immediate and familiar physical surroundings are altered.

Despite Ruth’s stubborn reluctance to take her daughter’s aberrant behavior seriously, a local child psychologist, Dr. Jake Beerlander (Tommy Lee Jones), who specializes in kids with similar problems (and gifts) insists on being allowed to examine her and eventually gets a court ruling to back him up. By this time Sally’s private creativity has yielded at least one work of genius — a complex and rather awesome spiral edifice, half tower and half walkway, constructed out of playing cards, tarot cards, postcards, and family snapshots. Ruth takes several photographs of it, and then it collapses — when a tarot card representing a “tower of destruction” with a man falling from it flutters loose from the construction.

For most of the remainder of the film Ruth and Jake proceed in their parallel efforts to “reach” Sally, grounded in different assumptions about her condition. Each of these efforts comprises a different suspenseful story line, and the divergence of the assumptions underlying them constitutes the battle of ideas the movie is concerned with. (Lessac cites Truffaut’s The Wild Child as one of his key influences.)

For Ruth, who fears any effort to make her daughter “normal” will deprive her of her gifts, the solution is to enter Sally’s imaginative world by literally re-creating it. With the help of her computer and virtual-reality technology, she reconstructs Sally’s house of cards in 3-D graphics on her computer screen, draws an architectural plan, then contrives to build a much larger version of the structure in the woods.

For Jake — working with an associate named Adelle (Esther Rolle) — the task is largely to get Sally to speak again. But his idea of what speech and communication consist of changes after the girl responds with another complex artistic creation — hiding by smearing herself with paint so that she’s perfectly camouflaged when she perches directly in front of a tree on the windowsill of the doctor’s observation room. 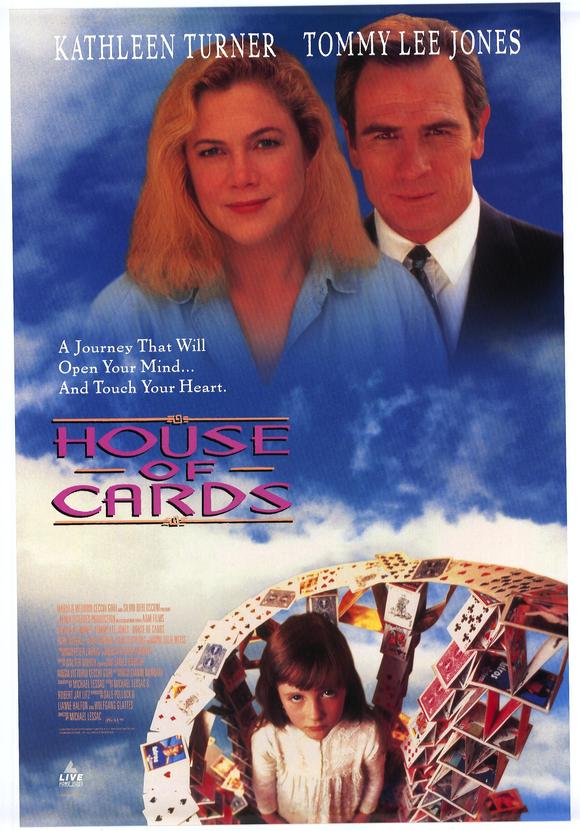 Giving these parallel story lines and their accompanying ideas particular force are the uncommonly good performances of Turner and Jones — who never impressed me before quite as much as they do in this movie. They fully inhabit their characters. (Menina, a nonprofessional who plays Sally without milking sentimental responses from us, is in a way equally effective.)

Turner, I’ve heard it said, is “overweight” in this part by industry standards — which is to say that she looks like the character she’s playing and not like a glamorous object, as she generally does. (I was especially grateful that there’s never a hint of budding romance between her and Jake — another example of the movie’s concentration and another aspect of its integrity.) Ruth’s own childlike personality — perfectly exemplified in her placing a penny on a railroad track and letting a train flatten it — meshes beautifully with her identification with her daughter, and Turner’s strength as an actor allows her to suggest this aspect of Ruth without making a meal out of it. (Interestingly enough, this part was originally written for a man. Lessac wanted William Hurt for the part, contacted Turner as a way of reaching Hurt, and after Turner expressed some interest of her own decided to rewrite the character as a woman.)

Jones sinks so well into his part that he’s never allowed to become a mere foil for Turner or a mouthpiece for notions the movie wishes to refute or endorse. One feels his concern and thoughtfulness throughout, and the movie gives full measure to the merits of his understanding of Sally’s behavior, though without suggesting it’s conclusive. (In many respects the humanity and unforced charisma of his part remind me of a couple of 60s movie psychiatrists — Rod Steiger in The Mark and Howard da Silva in David and Lisa.) A couple of fascinating sequences that show his and his associates’ methods of dealing with other gifted children is only one of the ways this picture does justice to his views.

The problem with trying to “sell” such a movie to the public is that most of the worthy counterparts that come to mind — Olaf Stapledon’s novel Odd John, the essays (or “clinical tales”) in Oliver Sacks’s The Man Who Mistook His Wife for a Hat, the movie Lorenzo’s Oil — aren’t very commercial either. (The only movie version of Sacks’s work to date, the highly commercial Awakenings, is so unspeakably vulgarized, sentimentalized, and reductive that it can’t at all be said to represent Sacks’s poetic grasp of the visionary side of certain apparent disabilities.) I could of course point out that Sally’s spiral construction reminds me of Richard Dreyfuss’s mysterious mound in Close Encounters of the Third Kind, but it also reminds me of Robert Smithson’s sculpture Spiral Jetty, which may make it seem even more obscure, at least to mainstream movie audiences.

Yet despite what some schlockmeisters have been telling you, the movie is quite easy to follow and respond to throughout — even when it furnishes us with a dream sequence near the end to suggest the ineffable. I would argue that the only obstacle to its being widely seen is not aesthetics or content but marketing. It’s precisely in an era such as ours, when marketing considerations wind up determining practically everything we can see, that a perfectly wrought gem that speaks to both mind and heart becomes all the more precious. So please do yourself a favor — ignore the media flack and go see this movie. 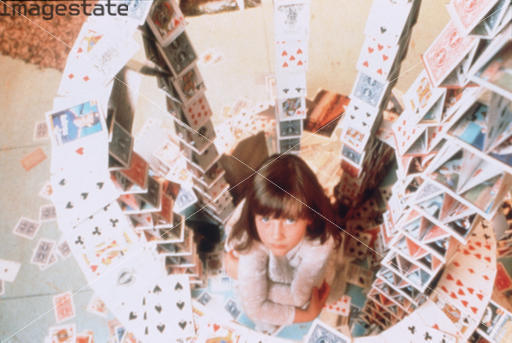