From the September 1, 1987 Chicago Reader. Criterion is releasing this film on a Blu-Ray with many extras.   –J.R. 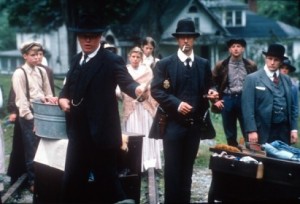 Try as he might, writer John Sayles has never been a natural filmmaker. But this sincere 1987 account of a coal miner strike and subsequent massacre in West Virginia in 1920 is so conscientiously detailed and so keenly felt and imagined — as well as attractively shot, by Haskell Wexler — that he deserves at the very least an A for effort. Simpleminded yet stirring, his depiction of a community of local whites, migrant blacks from the Deep South, and immigrant Italians gradually joining forces against the company bosses and their henchmen, under the leadership of a pacifist organizer, offers a bracing alternative to complacent right-wing as well as liberal claptrap. If Sayles’s bite were as lethal as his bark, he might have given this a harder edge and a stronger conclusion. But the performances are uniformly fine: Chris Cooper, Mary McDonnell, Kevin Tighe (perfect in dress and physiognomy, but strictly one-dimensional as scripted), James Earl Jones, and Sayles; the regional accents are especially well-handled. 133 min. (JR)