A profoundly sexist and eminently hummable 1954 CinemaScope musical — supposedly set in the great outdoors, but mainly filmed on soundstages — with some terrific athletic Michael Kidd choreography and some better-than-average direction by Stanley Donen. Based on a story by Stephen Vincent Benet (who took the plot from the rape of the Sabine women), it concerns six fur-trapping brothers who go to town to find wives after big brother Howard Keel marries Jane Powell; they wind up kidnapping them. A fascinating glimpse at the kind of patriarchal rape fantasies that were considered cute and good-natured at the time, performed to the music of Johnny Mercer and Gene DePaul. With Russ Tamblyn, Virginia Gibson, and Tommy Rall. 103 min. (JR) 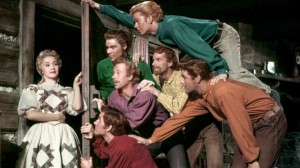