An Encyclopedia of Nuanced Gestures: NELLY AND MONSIEUR ARNAUD

Written for the Kino Lorber Blu-Ray of this film, released in September 2019. — J.R. 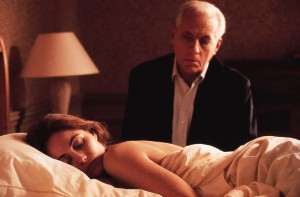 Let me start with a confession about the ways that both fashion and one’s age can affect one’s taste. My first acquaintance with writer-director Claude Sautet (1924-2000) came when I was a hippie and cinephile in my late 20s living in Paris in the early ‘70s, a follower of Cahiers du Cinéma in my viewing preferences more than a follower of its leading monthly competitor, Positif, although I usually purchased both magazines. Back then, Sautet’s The Things of Life (1970), and César and Rosalie (1972) struck me as the epitome of well-crafted, genteel yuppie navel gazing, especially for what I took to be their uncritical embrace of the upper middle class. He was clearly a skilled director of actors, but the overall whiff of his milieu seemed complacent to a fault. Consequently, I steered clear of his 1974 Vincent, Francois, Paul and the Others, one of his biggest hits, and when, five years later, back in the U.S., I wrote an article about Chantal Akerman, Jean-Luc Godard, and the team of Jean-Marie Straub and Danièle Huillet for the mainstream and middlebrow American Film, I was mortified when my editors condescendingly changed my title to “Jean-Luc, Chantal, Danièle, Jean-Marie, and the Others,” which led Akerman herself to reproach me for the piece, assuming that I’d dreamed up that title myself.… Read more »