Theory and Practice: The Criticism of Jean-Luc Godard

From the Summer 1972 issue of Sight and Sound. This was my first contribution to that magazine. — J.R. 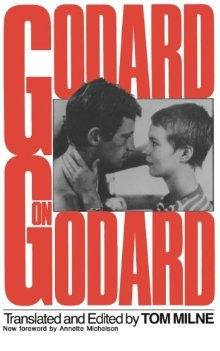 Godard’s collected criticism (1) is many things at once: informal history (1950–1967) of the arts in general and film in particular, spiritual and intellectual autobiography, a theory of aesthetics, a grab bag of puns. For those who read the pieces when they first appeared — chiefly in the yellow-covered Cahiers du Cinéma and the newspaper format of Arts — it was frequently ill-mannered gibberish that began to be vindicated (or amplified) when the films followed, retrospectively becoming a form of prophecy:

Each shot of MAN OF THE WEST gives one the impression that Anthony Mann is reinventing the Western, exactly as Matisse’s portraits reinvent the features of Piero della Francesca . . . in other words, he both shows and demonstrates, innovates and copies, criticizes and creates.

For those who encounter the films first, it is likely to seem like an anthology of footnotes serving to decipher and augment what may have once seemed like ill-mannered gibberish on the screen. But for those more interested in continuity than cause and effect, it rounds out a seventeen-year body of work — from an article on Joseph Mankiewicz in Gazette du Cinéma to the “Fin du Cinéma” title concluding WEEKEND — that has already transformed much of the vocabulary and syntax of modern narrative film, further illustrating a style that has passed from avant-garde to neoclassical in less than a decade.… Read more » 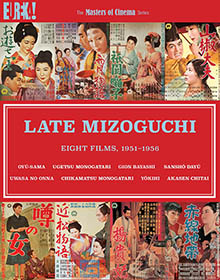 Late Mizoguchi – Eight Films, 1951-1956 (Eureka Entertainment). The publication of eight indisputable masterpieces in stellar transfers on Blu-ray is a cause for celebration. If Eureka is not exclusive in offering these individual titles, what makes this collection especially praiseworthy and indispensable is the scholarship, imagination and care that went into the accompanying 344-page booklet. Over 60 rare production stills are included, many featuring Mizoguchi at work. Striking essays by Keiko I. McDonald, Mark Le Fanu, and Nakagawa Masako are anthologized along with extensively annotated translations of some of the key sources of Japanese literature that inspired some of Mizoguchi’s late films. The volume closes with tributes to the great director written by Tarkovsky, Rivette, Godard, Straub, Angelopoulos, Shinoda, and others. Tony Rayns provides spoken essays and some full-length commentaries. 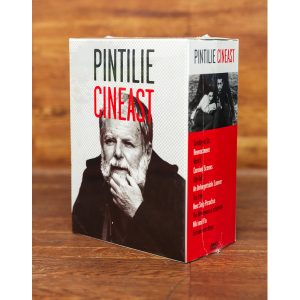