From the June 4, 1999 Chicago Reader. A lot of the material here subsequently turned up in my book Movie Wars. — J.R. 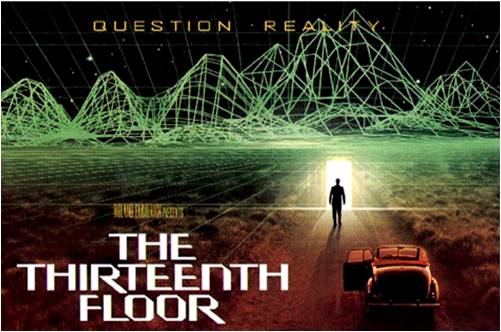 Written by Rusnak and Ravel Centeno-Rodriguez 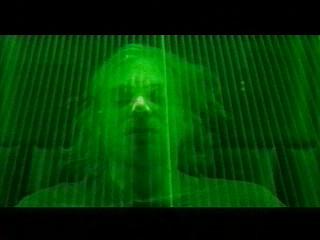 “I think, therefore I am,” reads the opening epigraph of The Thirteenth Floor, followed by the quotation’s source, “Descartes (1596-1650).” It’s an especially pompous beginning for a movie whose characters barely think, much less exist, but not too surprising given the metaphysical claims and pronouncements that usually inform virtual-reality thrillers.

This is the fourth such thriller I’ve seen in as many weeks, and if any thought at all can be deemed the source of these pictures cropping up one after the other — with the exception of David Cronenberg’s eXistenZ, a film with more than generic commercial kicks on its mind — it might be an especially low estimation of what an audience is looking for at the movies. The assumed desire might be expressed in infantile and emotional terms: “I don’t like the world, take it away.” In other words, for filmmakers stumped by the puzzle of how to address an audience assumed to be interested only in escaping without reminding them of what they’re supposed to be escaping from, virtual-reality thrillers seem made to order.… Read more » Directed and written by Yvonne Rainer

Approached as a narrative, Yvonne Rainer’s sixth feature takes forever to get started and an eternity to end. In between its ill-defined borders, the plot itself is repeatedly interrupted, endlessly delayed or protracted, frequently relegated to the back burner and all but forgotten. All the way through, the action proceeds like hiccups.

Yet approached as an essay, Privilege unfolds like a single multifaceted argument, uniformly illuminated by white-hot rage and wit — a cacophony of voices and discourses to be sure, but a purposeful and meaningful cacophony in which all the voices are speaking to us as well as to one another.

Everything in the movie can and should be experienced as part of an ongoing dialogue, and it’s no small tribute to its overall coherence and impact that one wants to have an ongoing dialogue with the movie–talk back to it, argue with it — and that one has to if the movie is going to make any sense at all. The dialogue may deliberately go in and out of sync with the on-screen characters, the characters may be periodically played by different actors, and the shots may shift without notice between color and black and white.… Read more »