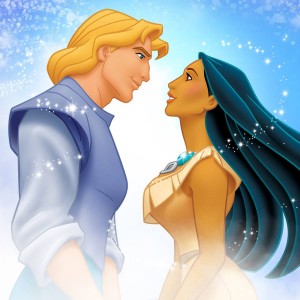 After some belated glimmers of ecological and postcolonial conscience in The Lion King, the Disney animation people go even further in revising some of their social priorities relative to the racism of Walt, and in their first cartoon feature based on real people do a conscientious and at times imaginative job of trying to illustrate aspects of the John Smith and Pocahontas story without reverting to all of the usual Hollywood lies. Contradictions confound certain aspects of this project — such as the language spoken by Pocahontas (which, in the Hollywood tradition, oscillates between tribal talk and the unaccented chatter of a contemporary Valley girl) — but overall this seems like a reasonable stab at an impossible agenda. Unsurprisingly, the film is usually more at home with animals (including a pampered English bulldog lifted from Tex Avery’s Spike) than with people, but it isn’t afraid to give both Pocahontas and John Smith some sex appeal. Personally, I prefer Hawks’s The Big Sky on this interracial, intercultural subject, but there’s something to be said for this movie’s monumental and anthropomorphic handling of landscapes — a constant in Disney cartoon rhetoric since Bambi — which reveals that the Leni Riefenstahl influence still persists in some ways.… Read more »