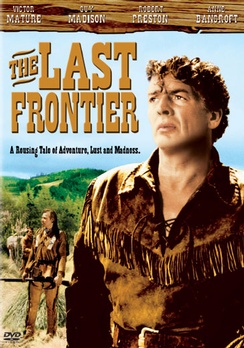 Spurred by the enthusiasm of Jean-Pierre Coursodon, posting in the chat group “a film by,” I follow his lead and also see Anthony Mann’s THE LAST FRONTIER for the first time, and I wind up basically agreeing with him: the film is a lot better than its reputation warrants (for one thing, some of the CinemaScope landscapes are breathtaking), and Victor Mature is especially good in it. In fact, it seems pretty clear that the fact that this movie has such an unfashionable cast -– not just Mature, but also Guy Madison, Robert Preston, and James Whitmore, which the relatively fashionable Anne Bancroft can’t quite offset -– has something to do with its apparently low place in the Anthony Mann canon. (The fact that the film has an imposed and unsatisfying ending doesn’t help either, but this is so perfunctory that I find it easy to overlook; Mann almost seems to glide right past it.)

Mature plays a Noble Savage here (a trapper who joins the U.S. Cavalry as a scout), and many people either forget or don’t know that he virtually began his career as a D.W. Griffith discovery playing precisely that sort of part. (In Hal Roach’s 1940 ONE MILLION B.C., where Griffith served as an uncredited coproducer, Griffith expert Seymour Stern once told me that discovering Mature for the lead role was in fact one of Griffith’s major contributions to the film.)

Even though Mature’s presence in a lot of bad movies (including, I should note, ONE MILLION B.C.), made him a laughing stock for much of his career, it’s worth noting that he was hip enough to be in on the joke himself; when he was once asked while passing through customs at some airport somewhere whether he was really an actor, he reportedly replied, “Many would dispute that.” But I always thought he could be good when the right opportunity presented itself. Another fine, underrated performance of his that showed off his wit was as Doctor Omar in Josef von Sternberg’s THE SHANGHAI GESTURE, made only a year after ONE MILLION B.C. There, of course, he’s the very opposite of a Noble Savage, a rather urbane degenerate, but in THE LAST FRONTIER he manages to take over this part with a fair amount of grace, imagination, and passion. And Mann being Mann, no one in the plot, not even him, is simple or entirely predictable. [6/26/08]