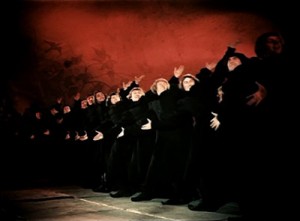 The second feature in Sergei Eisenstein’s controversial, unfinished trilogy, also known as The Boyar’s Plot, with a Prokofiev score and a histrionic, campy (albeit compositionally very controlled) performance in the title role by Nikolai Cherkassov (1946). The ceremonial high style of the proceedings has been interpreted by critics as everything from the ultimate denial of a cinema based on montage (under Stalinist pressure) to one of the most courageous acts of defiance in film history (Joan Neuberger and Yuri Tsivian) to the greatest Flash Gordon serial ever made (my own estimation). The second part climaxes in a dazzling, drunken dance sequence that features Eisenstein’s only foray into color. Thematically fascinating both as submerged autobiography and as a daring portrait of Stalin’s paranoia, quite apart from its interest as the historical pageant it professes to be, this is one of the most distinctive great films in the history of cinema — freakishly mannerist, yet so vivid in its obsessions and expressionist angularity that it virtually invents its own genre. (JR) 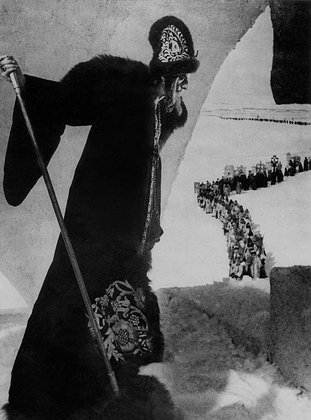 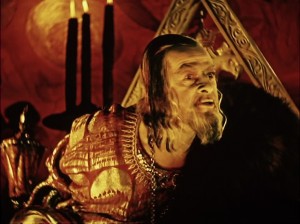