Recommended Reading: AUDIENCE OF ONE 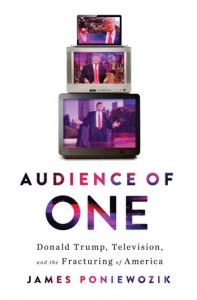 The central and irreducible insight of James Poniewozik’s brilliant book — making it for me the only account I’ve read of Donald Trump that makes his poisonous career both legible and explicable — is to view that trajectory as part of the tainted history of television, and to see Trump as a hapless victim of that history as well as a sinister perpetrator.

This is an insight that I’ve already had glimmers of whenever I’ve blanched at how much ungodly fun Rachel Maddow has been deriving from the cornucopia of Trumpian horrors, and how creepily her nightly boasts about what a “big” show she has in store for us replicates the weekly promises of Ed Sullivan on his variety show between 1948 and 1971. But the fact that I’ve never watched “reality TV” means that I need someone like a New York Times TV critic to show me how dutifully and consistently Trump has replicated its gestures, assumptions, and attitudes as President, and how doggedly both Fox TV and MSNBC have remained in sync with and in thrall to its very fibers. 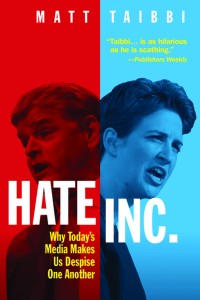 This is also part of the persuasive thrust of Matt Taibbi’s recent Hate Inc.: Why Today’s Media Makes Us Despise One Another, which claims to be inspired by Edward Herman and Noam Chomsky’s Manufacturing Consent. But Taibbi’s lamentable decision to draft this argument virtually as a series of off-the-cuff emails makes it closer to reality TV itself than it is to a proper book, occasioning such colossal blunders as ascribing Michelle Obama’s very best sound-bite to Hilary Clinton.

By contrast, Poniewozik has both the wit to call his ten chapters “episodes” and the literacy to write them as chapters rather than as emails or as sound-bites. He even has the taste and breadth to draw intelligently on such predecessors as Hannah Arendt, Roland Barthes, George W.S. Trow, and David Foster Wallace in the process of instructing us televisually. And as a media historian-critic, he convinces me throughout that he knows his terrain from top to bottom — unlike, say, Nick Smedley and Tom Sturges in Preston Sturges: The Last Years Of Hollywood’s First Writer-Director, another new book I’ve been lately perusing, which claims to be giving us the comprehensive last word on its priceless subject while needlessly insulting Christmas in July (1940), Sturges’ second feature, and not even bothering to mention him having produced René Clair’s I Married a Witch (1942). Poniewozik even convinces me that we have to understand Trump, Fox TV, and MSNBC as three separate facets of the same phenomenon, and that this is where our understanding needs to start. [11/2/19]