Friends and Aliens [FIRE IN THE SKY] 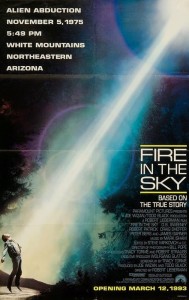 FIRE IN THE SKY

“Based on the true story,” crows Paramount in the ads, and the words “Based on a true story” appear on-screen right after the opening credits. Under the circumstances — Fire in the Sky being the story of one Travis Walton (D.B. Sweeney), who was allegedly knocked to the ground by a ray from a UFO in an Arizona forest on November 5, 1975, then whisked away by the same UFO only to be spat out five days later minus his clothes and sanity — these are clearly fighting words.

I came to this movie fully prepared to execrate it, but on reflection I’m more inclined to congratulate Paramount on its ability to get people like me riled up with its Barnum-like come-on — a good way of getting all of us to pay attention. In fact, considering that the encounter with extraterrestrials is couched in subjective rather than objective terms, “based on the true story” doesn’t seem such an outrageous tag. Furthermore, some of the implications of the line are partially undercut, or at least displaced, by a quotation that appears on-screen before the credits: “‘Chance makes a plaything of a man’s life’  — Seneca, First century A.D.”

Personally, I think that all movies are fantasies to begin with — documentaries and so-called true stories most of all — so the issue of being a “true story” seems moot. The press materials for Fire in the Sky report that, according to a 1990 Gallup Mirror of America survey, “Forty-six percent of Americans believe that there are ‘people somewhat like ourselves living on other planets in the universe.'” My first response is to wonder how this could possibly be true considering the steady rise of racism, homophobia, misogyny, and diverse other forms of xenophobia and intolerance: surely fewer than 46 percent of Americans believe that there are people somewhat like themselves living on the next block, much less in other countries. My second response was that probably 46 percent of Americans would rather believe that people somewhat like themselves are living on other planets than believe that they could be living in other countries, much less on the next block.

Without being any sort of student of UFO sightings, I think I probably share the skepticism of most people (among them, presumably, the unmentioned 54 percent of Americans in the Gallup survey) about extraterrestrial beings, though I would acknowledge the odds in favor of intelligent life in other planetary systems as well as the unreliability of the press and “experts” in keeping us abreast of things we still know practically nothing about. (Among the treasured books in my home library are The Books of Charles Fort and Damon Knight’s biography Charles Fort: Prophet of the Unexplained, both chronicling the library research into phenomena unexplained by science — including UFO sightings — carried out by the iconoclastic Fort in the early part of this century.) But the banal similarities between most accounts of UFO sightings (and the fairly unconvincing details that crop up in them) added to the emotional reasons people have for believing these stories convince me the accounts are untrue. I’m reminded of the Bridey Murphy craze that swept the country when I was in my early teens — an instructive instance of human gullibility that adds some historical perspective to the discussion. 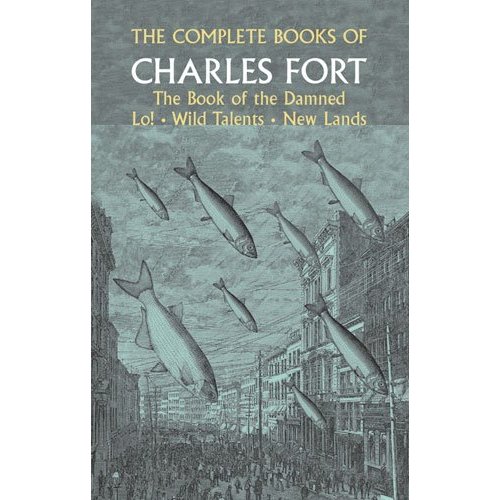 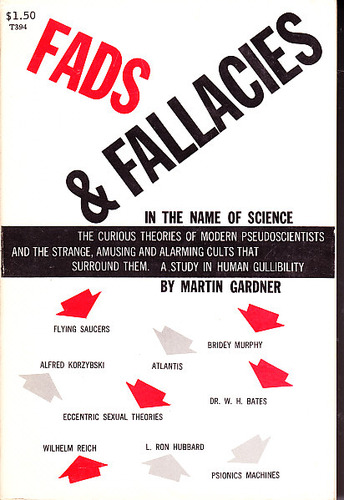 In 1952 a housewife in Pueblo, Colorado, Mrs. Virginia Tighe, began to speak under hypnosis “in an Irish brogue about her previous incarnation as a red-headed colleen named Bridey Murphy” (as Martin Gardner describes it in his indispensable Fads and Fallacies in the Name of Science). Working with William J. Barker of the Denver Post, Morey Bernstein — the local businessman who had put her under hypnosis — wrote a book called The Search for Bridey Murphy (1956) that topped the national best-seller lists for weeks, was printed in condensed form in 40 newspapers and translated into five other languages, and spawned various spin-offs and fads — including an enormously successful LP of one of Mrs. Tighe’s trance sessions, at least three rock songs, and a pretty awful movie released the same year. The press, which was about as serious then as it is today, devoted most of its energies to tracking down (unsuccessfully) records of Bridey Murphy in Ireland instead of checking out Mrs. Tighe. In my hometown in Alabama, a barber and champion fiddler hypnotized a teenage boy who suddenly started speaking Spanish, a language he allegedly didn’t know; in one of the trance sessions I witnessed myself, the boy mimed an obscure form of basket weaving supposedly known only to certain Mexican women (one of whom was brought along for the occasion). I’m sure that dozens or even hundreds of such experiences were replicated nationwide.

Before the year was out, however, the Chicago American blew the lid off the story by revealing that Mrs. Tighe had grown up in Chicago across the street from an Irish widow who liked to recount tales of her youth and whose maiden name was in fact Bridey Murphy. As a result Bernstein’s book dropped off the best-seller list, but ironically and predictably, this revelation received much less public attention and interest than the original story, and for years afterward some people were still citing The Search for Bridey Murphy as “proof” of reincarnation.

The only kind of “proof” we have of Walton’s story is that four fellow loggers, including his friend Mike Rogers (Robert Patrick), offered eyewitness accounts of a UFO knocking Walton to the ground before they fled the scene in terror; a little later, when Rogers drove back to the site alone, Walton had disappeared. Three of the loggers passed lie-detector tests in 1975 (and the fourth, it’s suggested in the movie, had reason to lie about his testimony), and at the very end of the film a title informs us that in February 1993 the same examiner administered the test again and this time all of the loggers — perhaps including Walton as well, though this isn’t specified — passed.

While it certainly isn’t brilliant, Fire in the Sky offers some fairly efficient story telling and a few effective visual and dramatic moments. A couple of the ‘Scope compositions in the film are much more striking than anything they have to show or dramatize: one highlights an interesting pattern of slanting telephone lines on a hilltop as the loggers are setting off on their fateful trip to the forest; the other shows a comatose Walton, after his return, alone in a hospital ward lit by a single lamp, a rainstorm raging outside. A few sequences are fairly adroit at manipulating the audience’s imagination — most notably the opening image of a small pickup truck racing through the woods at night, the climactic UFO sighting, and much later in the film an extended flashback of Walton remembering his traumatic alien captivity, a sequence testifying to the power of elliptical suggestion (though its ending seems familiar, even humdrum).

The real subject of Fire in the Sky isn’t whether or not Travis Walton was abducted by aliens in a UFO — an issue that’s more of a narrative come-on than an ongoing theme, despite a new-age score by Mark Isham that is clearly supposed to suggest the usual kind of otherworldliness. Indeed, after getting us all into the tent with its “true story” jive, the movie does a neat about-face; it winds up having much more to do with the relationship between Travis and his best friend, Mike, than it does with extraterrestrials or alien rays. Of course Walton’s mysterious disappearance plays a major role in their relationship, but scientific curiosity isn’t really what this movie is about.

The first flashback shows Travis riding his motorcycle through the small town of Snowflake, Arizona (actually the location is Douglas County, Oregon), and picking up doughnuts on his way to Mike’s house. There he shinnies up the facade to wake his girlfriend (Georgia Emelin), Mike’s sister, on the second floor, then shows Mike his drawing of “M.T. Motors,” a fantasy filling station he’d like them to build and run together. The character reminds us a little of James Dean’s persona — that climb to the second floor seems straight out of East of Eden — and seems calculated to make us feel a bit protective toward this childlike figure.

After Travis disappears, Mike becomes the film’s focal point. But though at first Mike seems a stable and adult figure compared to Travis, that status is undermined once Mike discovers that most people in town don’t believe his account of the UFO; his rage about this escalates, and after Travis returns Mike never seems to regain his initial sense of security about himself. In effect, the movie charts the loss of innocence experienced by both characters; insofar as the extraterrestrials matter at all, they function as catalysts, not subjects in their own right. By implication it’s Mike, not his friend’s captors, who becomes the pertinent bug-eyed monster, at least to his family and neighbors.