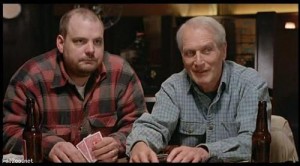 This is the first Robert Benton movie I’ve really liked — and possibly my favorite Paul Newman performance since The Hustler. Based on a Richard Russo novel and set in upstate New York, it has both the poetry and the authenticity of failure, describing a community of fuckups headed by a 60-year-old part-time construction worker (Newman) who left his family decades earlier, and including his pathetic assistant (Pruitt Taylor Vince), his mean-spirited occasional employer (Bruce Willis at his best), the latter’s neglected wife (Melanie Griffith), and an ineffectual one-legged lawyer (Gene Saks). Conceived somewhat in the spirit of Chekhov’s stories, this 1994 feature ambles along semiplotlessly, focusing on the petty love-hatreds that link people together in small towns and the everyday orneriness that keeps them alive; it becomes only slightly less compelling when it develops a plot about the hero belatedly making peace with his abandoned son and one of his two grandsons. For better and for worse, it’s still a Hollywood movie (and a white boys’ movie to boot), but one with a more alert eye and feeling for American life than most of its competitors. With Jessica Tandy (in one of her last performances) and Dylan Walsh. 110 min. (JR) 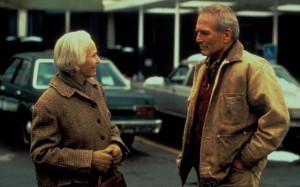