The Trouble With Harry [BLOOD WORK] 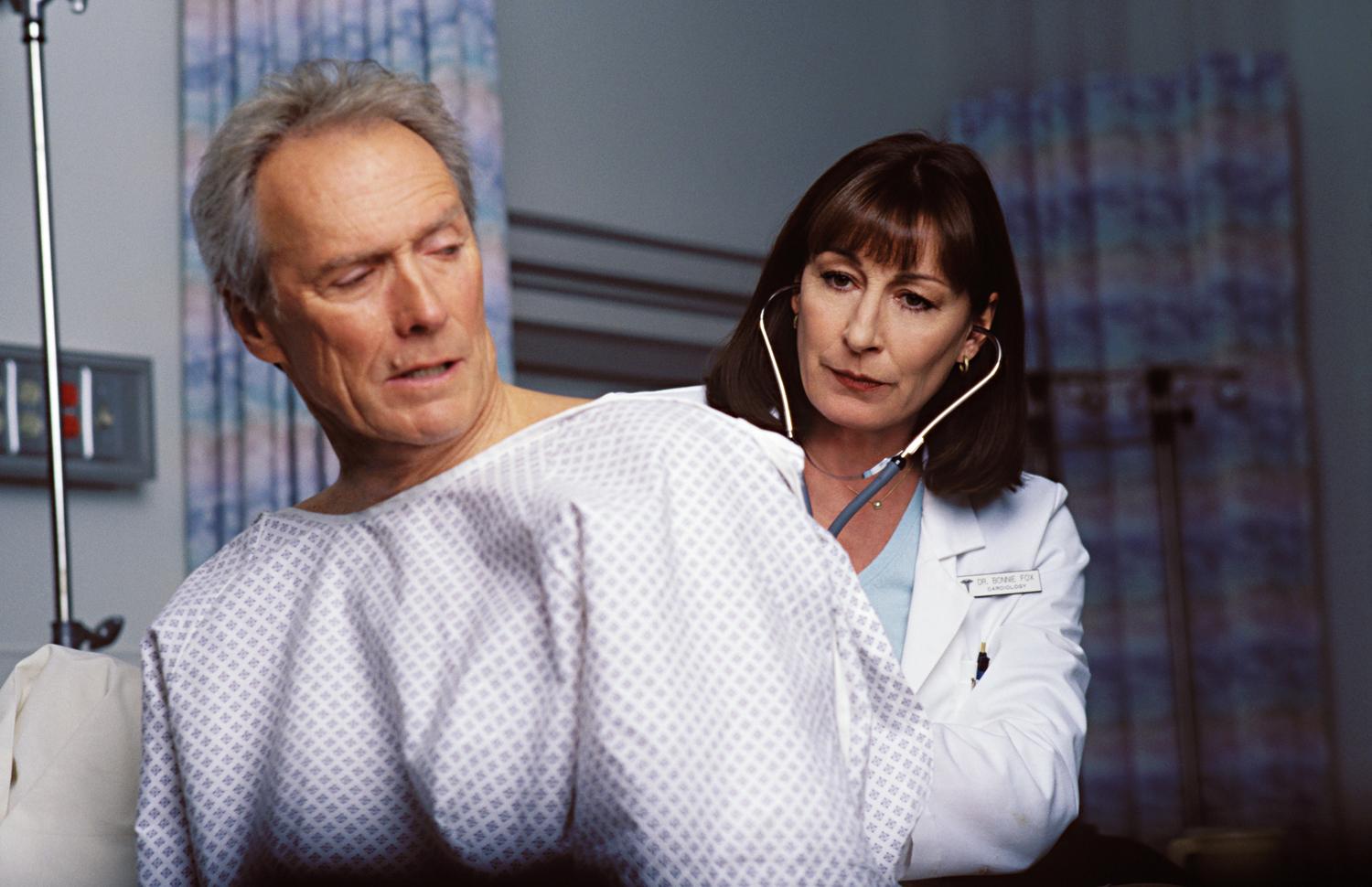 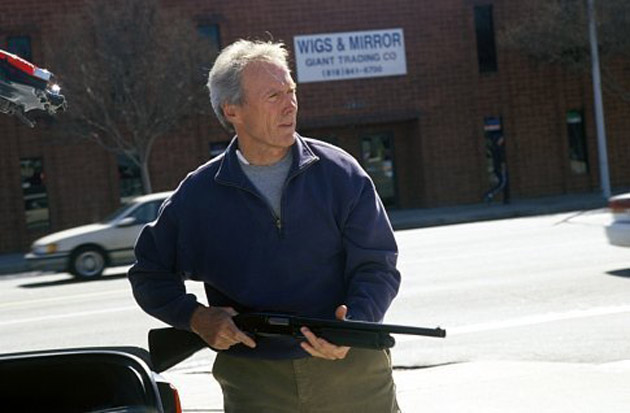 Clint Eastwood’s latest slugfest, Blood Work, is ultimately just another Dirty Harry opus. And by now Harry has become boring, not because Eastwood keeps trying to redefine the character the public tends to remember him for, but because he doesn’t try to redefine the punk villains who keep Harry busy and dirty.

In Blood Work — not technically but generically and existentially a Dirty Harry adventure — the villain is a standard-issue serial killer. It’s a truism that there are more serial killers in movies than there could possibly be in life, and what keeps them mythic seems to have less to do with the world we live in than with the sadistic and infantile ways we like to think about that world. I have come to associate pleasure in cinema with the absence of serial killers, and the pleasure I associate with Blood Work includes everything that doesn’t relate to the silly one lodged near its center.

Much more interesting than this teenage fantasy is the mainly unseen woman character who inadvertently keeps the hero alive. FBI ace Terry McCaleb (Eastwood) suffers a heart attack after chasing the serial killer but survives, thanks to a heart transplant from a young Latino single mother, a victim of a convenience-store holdup. Graciella (Wanda De Jesus), the slain woman’s sister, tries to persuade McCaleb — retired and recuperating from the surgery on his boat docked in LA’s harbor — to find the killer. Naturally, the two eventually become involved, suggesting an incest fantasy that’s a lot fresher than the tired serial-killer doppelganger theme. 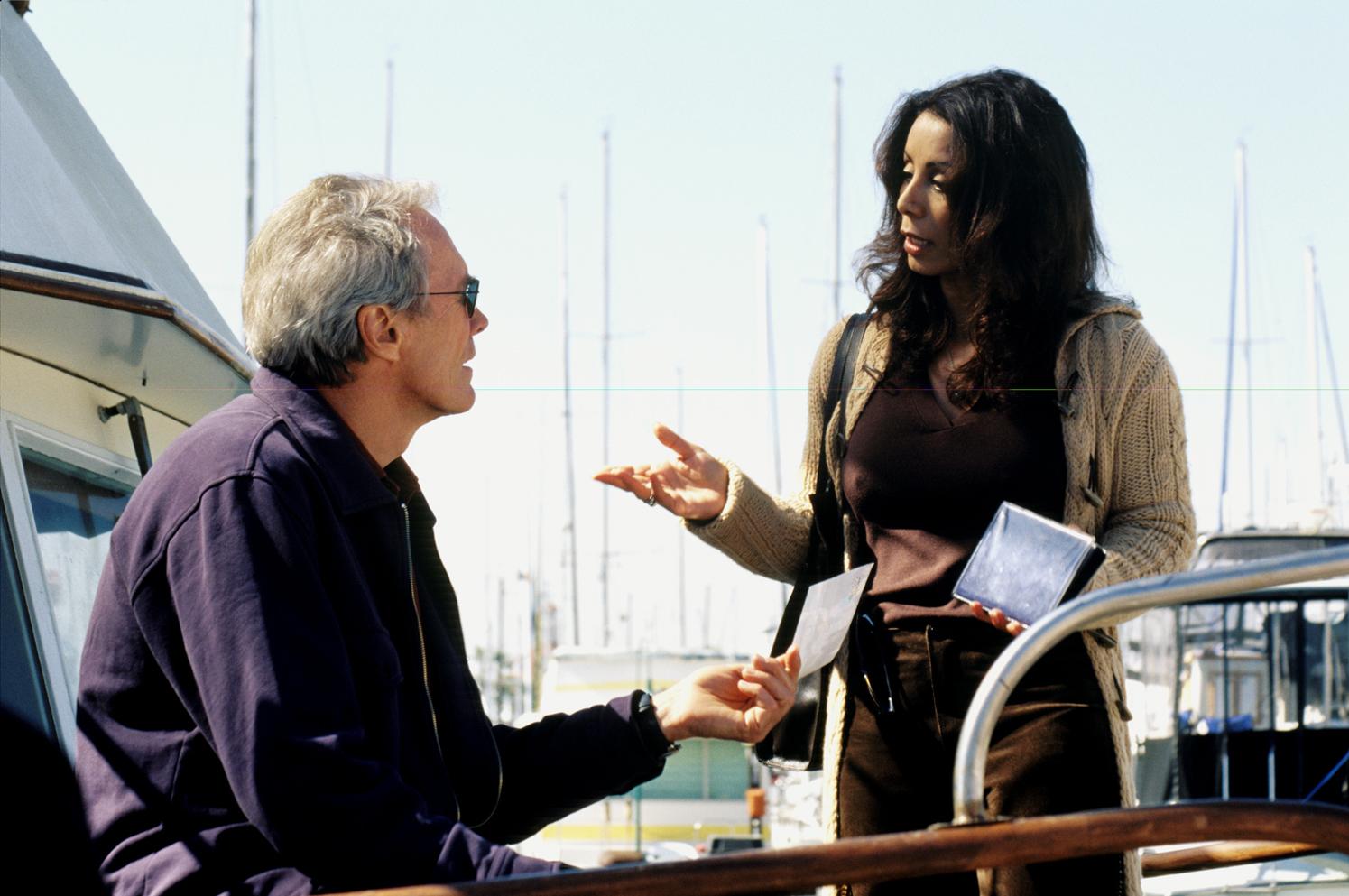 This and other kinds of kinkiness are characteristic of Eastwood’s oeuvre, though they’re included more for their suggestive powers than out of a desire to explore sexual pathologies in any detail. Much more central, it turns out, is the competition between what amounts to two movies. One of them uses all the Dirty Harry and serial-killer baggage as a pretext to get into more humdrum and realistic characters, and that’s the movie I like. The other piles on ethnic and generic stereotypes — such as a comically sputtering, blustering Mexican cop (Paul Rodriguez), a brutal Russian convict built like a football player (Igor Jijikine), and the cackling and conniving serial killer (whose identity I won’t reveal) — and that’s the movie that puts me to sleep. 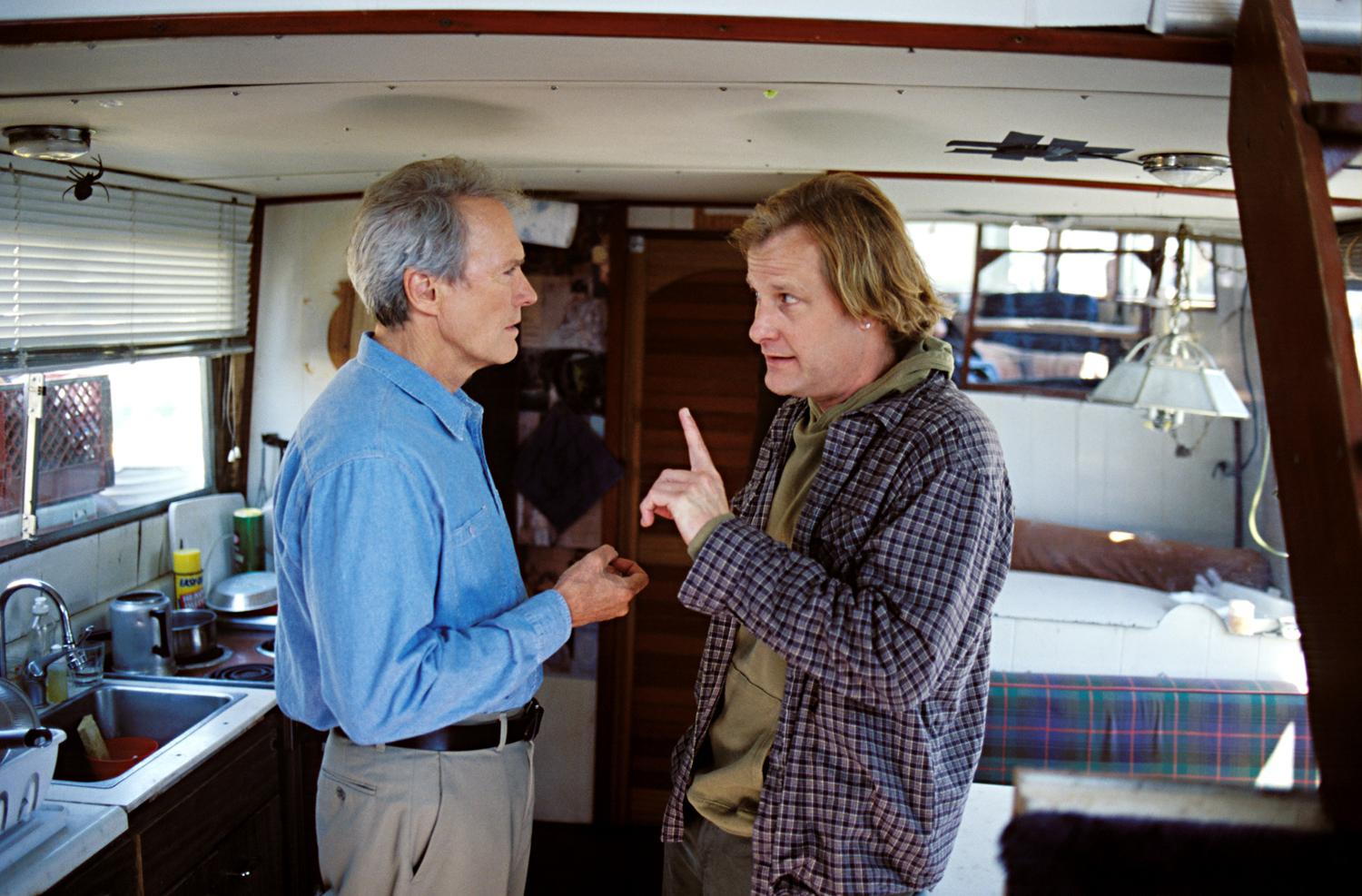 The humdrum and realistic characters include McCaleb’s stern and principled doctor (Anjelica Huston) — not a western schoolmarm but an entirely believable physician focused on her profession; a black police officer (Tina Lifford) who remembers McCaleb as a generous colleague and tries to cut him some slack in return; McCaleb’s idle and self-deprecating next-door neighbor in the harbor (Jeff Daniels), whom he hires as a temporary driver and baby-sitter for the slain woman’s son, but who fancies himself his partner; the distraught but helpful wife (Alix Koromzay) of the victim of another — or is it the same? — serial killer, whom McCaleb tracks down for questioning. Even McCaleb periodically slides into this category, when he isn’t dutifully living up to the Eastwood Legend: a man whose frailty and age keep undermining his exertions, unlike the superhero who knows no bounds. In a similar way, McCaleb slithers back and forth between old pro and amateur sleuth, working with and without his former law-enforcement connections.

That Eastwood plays both parts, often shifting between the two within a single scene, shows the extent to which Blood Work is a detective story divided against itself. When the movie relaxes enough to settle into the mundane southern California atmosphere, it calls to mind the four wonderful Hoke Moseley detective novels written by Charles Willeford at the end of his life, after he grew tired of the macho games that tended to dominate his earlier books: Miami Blues (1984, the basis for an excellent movie six years later), New Hope for the Dead (1985), Sideswipe (1987, my personal favorite), and The Way We Die Now (1988). All four books are set in a highly deglamorized contemporary Miami and probably have as much observational validity as John Updike’s Rabbit novels, whose occasional Florida settings they evoke, especially when they settle on daily rituals and characters wallowing in their own mundaneness and inertia. 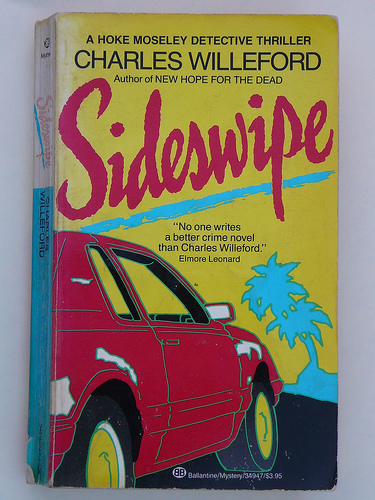 Even before he developed his chops as a director, Eastwood was always at the mercy of his scripts, and so he remains. He does choose and develop them, but he has to depend on them as creative launching pads, since he apparently never dreams up any of the stories on his own. As an actor, he generally makes the most of moments of underplayed bombast in these scripts, yet as a director he tends to thrive more on a feeling for stasis and drift than on directed and focused movement. My favorite moment in his work to date, which uncannily combines the quiet bombast and the drift, is the closing scene of White Hunter, Black Heart, a film in which he plays a director modeled on Anjelica Huston’s dad — a scene in which he performs a little dance of defeat and despair that ends rather than begins with the command “Action.” In Blood Work Eastwood and some of the other actors intermittently inch toward moments of this kind, but the Dirty Harry machinery keeps dragging them back, turning them into cartoons. 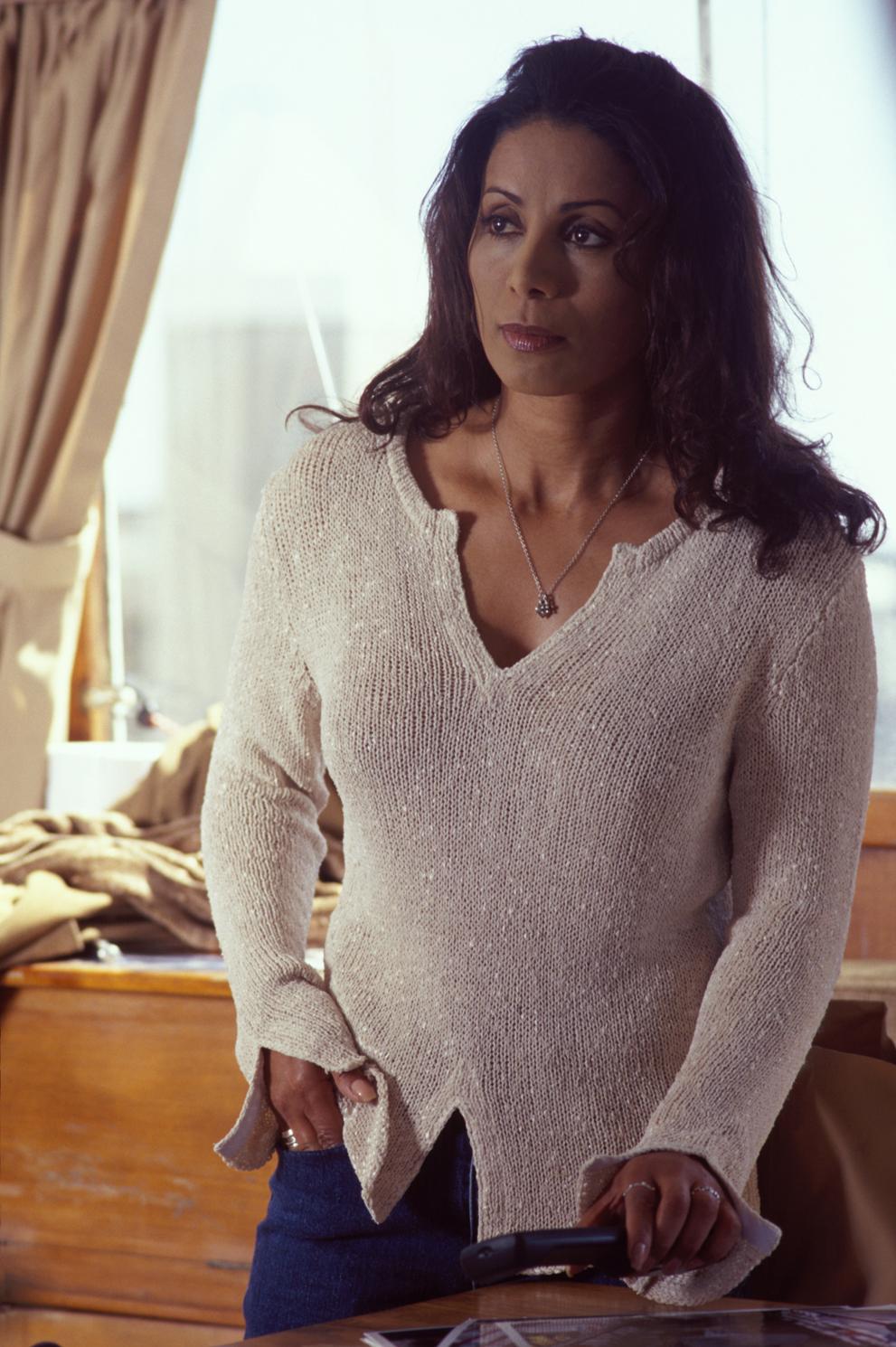