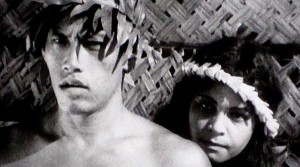 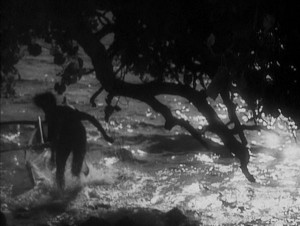 The last film of F.W. Murnau, who was probably the greatest of all silent directors (he didn’t live long enough to make sound films, as he died in an auto accident only a few days after work on the musical score of this masterpiece was completed). Filmed entirely in the South Seas with a nonprofessional cast and gorgeous cinematography by Floyd Crosby (fully evident in this fine restoration), this began as a collaboration with the great documentarist Robert Flaherty, who still shares credit for the story, though clearly the German romanticism of Murnau (Nosferatu, The Last Laugh, Sunrise) predominates, above all in the heroic poses of the islanders and the fateful diagonals in the compositions. The simple plot is an erotic love story complicated by the fact that the young woman becomes sexually taboo when she is selected by an elder (one of Murnau’s most chilling harbingers of doom) to replace a sacred maiden who has just died. The two “chapters” of the film are titled “Paradise” and “Paradise Lost,” and another theme is the corrupting power of “civilization”  – money in particular — on the innocent hedonism of the islanders.… Read more »

Why Has Bodhi-dharma Left For The East? 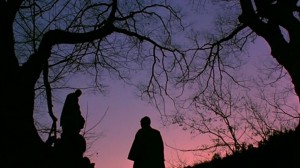 A much more serious treatment of Buddhism than Bernardo Bertolucci’s Little Buddha, this 1989 Korean feature by Bae Yong-kyun (who produced, directed, shot, and edited) has become something of a cult film, and it’s easy to understand why. The title is an unanswerable Zen koan, at one point echoing the narrator’s queries: Who is Buddha? Who isn’t he? The skeletal plot concerns an old master, a young disciple, and an orphaned boy in a remote Korean monastery in the mountains, but the film’s main offering is its contemplation of and inexhaustible fascination with the natural world; indeed, we periodically have the sensation that the narrative has been suspended almost entirely for the sake of this meditation. Full of ravishingly beautiful images rather than ravishingly beautiful shots, the film conveys not so much a filmic intelligence as a Buddhist intelligence that’s being translated, step-by-step, into movie terms; the film seems to reach us from a certain remove, with positive as well as negative consequences. Count on something slow, arresting, and lovely, and if you’re looking for drama, expect to find it internally. 135 min. (JR) 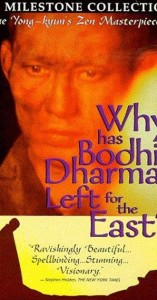