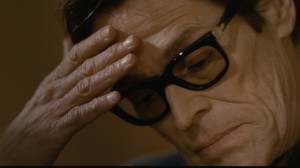 1. I can easily understand why some of Abel Ferrara’s biggest fans have certain reservations about his Pasolini, available now on a splendid region-B Blu-Ray from the BFI.  Even if it’s a solid step forward from the stultifying silliness of Welcome to New York, it lacks the crazed, demonic poetry of Bad Lieutenant, The Addiction, and New Rose Hotel; most disconcertingly, it’s a responsible, apparently well-researched treatment of one of the most irresponsible of film artists, made by another film artist generally cherished for his own irresponsibility. And stylistically, it’s almost as if Ferrara has moved from being the great-grandson of F.W. Murnau to being the grandson of Vincente Minnelli — although one could argue, more precisely, that this isn’t really an auteur film at all. Yet as a portrait of the great and uncontainable Pier Paolo Pasolini, filtered through the last day of his life –- a day focused on new creative work (a novel in progress and a film in preproduction) as well various other activities, at home and on the street -– it carries an undeniable conviction and emotional authenticity in which the prosaic strengths of Lust for Life may finally be more relevant to this film’s serious ambitions than the poetic flourishes of a Faust or a Tabu. Even the mix of English and Italian dialogue, which poses a problem for some Italian viewers, struck me as a form of honesty about Ferrara’s vantage point more than a commercial compromise.

The BFI release includes two valuable extras. There’s a wonderfully unbridled and often hilarious 23-minute interview with actor Robin Askwith recalling his work with Pasolini on The Canterbury Tales -– one of my least favourite Pasolini pictures, though for me this didn’t interfere in the slightest with the good-natured wit, gusto, and observational insights of Askwith, political incorrectness and all. And for perceptive remarks about Pasolini as well as Pasolini, a lengthy on-stage discussion of Ferrara with members of his skillful cast (Willem Dafoe, his wife Glada Colagrande, and Maria de Madeiros) and Paulo Branco, as well as an audience including Wes Anderson, is also highly recommended. 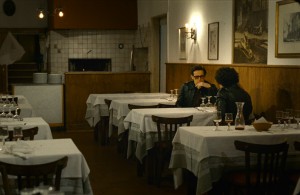 2. At the age of 16. I was dumb enough — or at least sufficiently ”of the period” (1959) — to take Stanley Kramer’s On the Beach seriously, and I was far from alone in taking this attitude.  So it was largely an impulse to reassess both myself and 1959, not Kramer, that led me to fork out $13.64 for a Korean import DVD from Amazon. Why is it that the extinction of humanity from a nuclear holocaust was a live and vital subject back then and not just a post-apocalyptic trope, as it’s more apt to be today? Is this because we can no longer entertain the notion of a few movie stars (stolid Gregory Peck, luminous Ava Gardner, Fred Astaire grim and wizened in an exceptional “straight” role, Anthony Perkins wrestling awkwardly with his version of an Australian accent, and the now-forgotten Donna Anderson) getting drunk around Melbourne while awaiting the fallout to arrive, or have we by now internalized such quaint possibilities in very different terms? And if they’re different, what are they now, exactly? How do we respond to the prospect of nuclear annihilation, or do we respond at all? 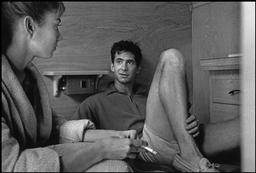 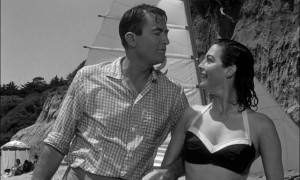 Apart from being a better movie with a similar theme a few years later, Dr. Strangelove clearly had the future zeitgeist down pat in a way that On the Beach clearly doesn’t, but paradoxically this makes the Kramer film far more adept and useful as a time machine. What I still find affecting about this film in spite of everything is the everyday manner in which characters move in and out of denial about their upcoming and inevitable extinction. Even if the movie keeps getting diverted and interrupted by hokey Hollywood standbys — Ernest Gold’s insultingly bombastic score, telling us what and how to feel whenever Kramer feels that he can’t do it all on his own (which is often), and more boilerplate romantic clinches than you can shake a stick at — something real and poignant periodically leaks through. Over half a century later, nothing could feel more unfashionable.