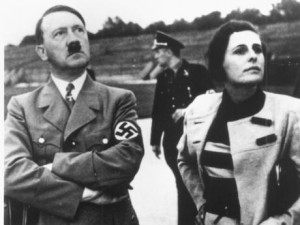 A fascinating if irritating and ultimately unsatisfactory 1993 German documentary by Ray Müller about the remarkable filmmaker whose work provided Nazi Germany with its greatest propaganda. It’s important to know that this film was made at Riefenstahl’s own instigation, clearly designed to accompany her then recently published autobiography, and that she had veto power over who would be interviewed (don’t expect to see Susan Sontag here). Consequently this is more often self-portrait than portrait; like Hitler in Riefenstahl’s Triumph of the Will, she’s presented as a fully formed deity without family background or ideology except for a reverence for beauty and strength. Admittedly, compared to the Nazi industrialists who went unpunished, she has suffered disproportionately for her Nazi associations (albeit far less than any Jew who was gassed), and she deserves full recognition as an extraordinary woman; even in her early 90s she remained a courageous deep-sea diver, as the film shows. But at 182 minutes the film has only a few skeptical asides, and it shirks certain basic historical facts — allowing its subject to insist, for instance, that Triumph of the Will was a “straight” documentary, with no allusion to all the carefully crafted studio retakes. John Simon’s gushing, unscholarly review of her autobiography in the New York Times, a literary equivalent to Reagan’s Bitburg speech, concluded that Riefenstahl “may have compromised her humanity. But her artistic integrity, never.” If you agree with Simon that artistic integrity has nothing to do with humanity, this is the movie you’ve been waiting for. Incidentally, the film’s stupid title was coined strictly for the Anglo-American market; the original German title translates as “Leni Riefenstahl: The Power of Images.” (JR) 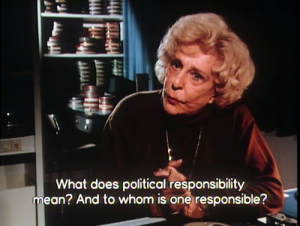