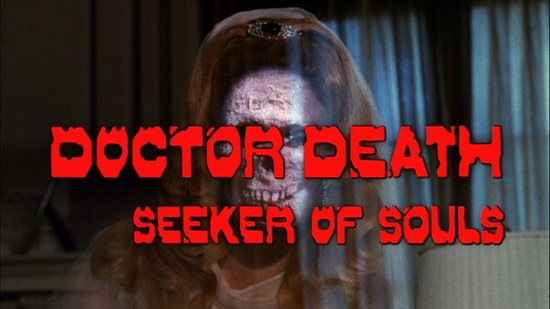 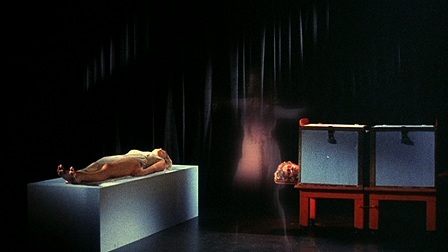 Before dying from an accident, Laura Saunders’ last words to her husband Fred are, “I’ll come back”. Unable to accept her death, Fred visits a number of fake spiritualists and death cultists until a classified ad (“Control your own reincarnation”) leads him to Tana, a friend and former lover of Dr. Death who brings Fred to one of Death’s ‘demonstrations’: a girl scarred by an accident is willingly sawed in half so that her soul can pass into the undamaged body of another women. Death dubs the reawakened corpse Venus and promptly becomes her lover, incurring the jealousy of Tana, who subsequently throws acid in Venus’ face. At a later meeting with Fred, Death explains that he discovered his power — based on a formula kept in an amulet around his neck — 1000 years ago, and his soul has survived ever since by passing into a succession of bodies of various races and both sexes belonging to his murder victims, He offers to revive Laura’s corpse with another woman’s soul for $50,000 and Fred agrees; but when Tana is garishly murdered for this purpose, Fred is appalled, and after Death fails to animate Laura’s body, asks him to keep the money and abandon the project. … Read more »

Actually, Serge Alexandre Stavisky (born in Russia as Sacha) was a swindler who sold 40 million francs’ worth of valueless bonds to French workers, but he moved about in high circles. In spite of a shady past, he was generally known in the early 1930s as a respectable financier with first-rate political connections, associated with the municipal pawnshop of Bayonne. When his fraud was discovered in December 1933, he promptly fled, and the police caught up with him in Chamonix the following month. According to official history, he either committed suicide or was murdered by the police, although the latter explanation appears the likelier one: the Paris press rather implausibly reported that he fired two bullets into his head.… Read more »