There’s certainly a lot more footage — 53 minutes, to be precise — which makes this better in certain ways than the original Apocalypse Now, though the flaws are also magnified. (Kurtz’s Cambodian savages slaughtering a caribou — actually, it’s a Filipino ceremony — and kneeling before Willard and then laying down their weapons en masse seems even more insulting and ludicrous than it did in 1979; and the pan to The Golden Bough and From Ritual to Romance remains the most pretentious shot in the history of cinema, far worse than anything ever perpetrated by Antonioni.) Francis Ford Coppola’s guilty-liberal rethink of John Milius’s right-wing update and transplanting of Joseph Conrad’s “Heart of Darkness” to the war in Vietnam is above all an environmental experience, a theme-park ride enhanced by what may still be Walter Murch’s best sound editing (including some great use of the Doors) and Michael Herr’s second-best writing after Dispatches for Martin Sheen’s voice-over (all of it written long after the movie was shot). Looking for a responsible or even coherent account of that war here would be barking up the wrong tree, and the best way of glossing over this embarrassing lack would probably be to pretend, as many Western viewers do anyway, that this movie has no Vietnamese spectators. Like so many of our overseas escapades, this is really about American braggadocio and insanity in an exotic locale, spiced with a time-capsule sense of 60s counterculture, swell atmospheric expressionist effects, and many interesting performances (by Sheen, Robert Duvall, a teenage Laurence Fishburne, Sam Bottoms, Frederic Forrest, Albert Hall, and even Dennis Hopper at his most irritating — though not exactly bald Marlon Brando, who is mainly used as a parade float). Back in 1979, this country’s film industry still had craft, class, showmanship, and Technicolor, most of which it has subsequently squandered or misplaced, making this a good showcase for the kind of entertainment we used to get. 203 min. McClurg Court. 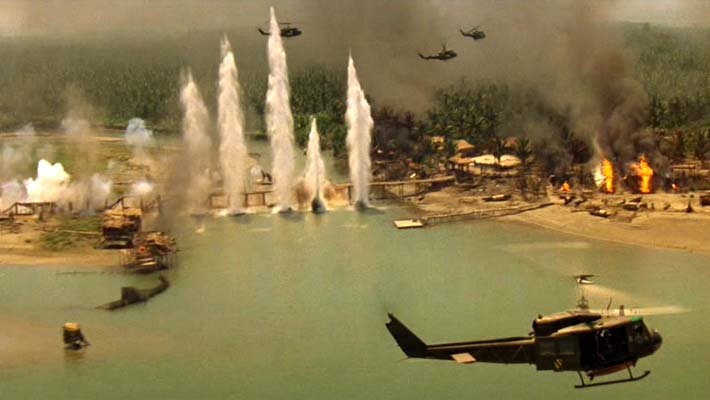