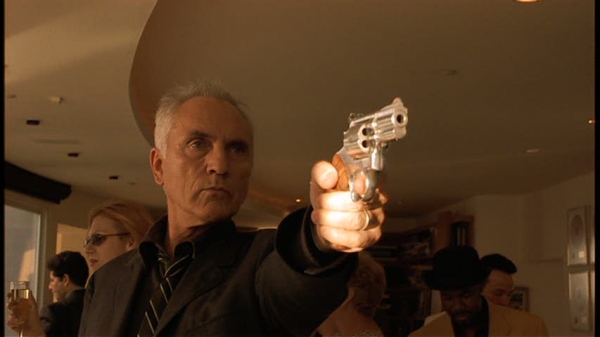 Many of Steven Soderbergh’s better films seem to exist in the shadow of their predecessors. For all its freshness, Sex, Lies, and Videotape, his first feature, was a replay of many self-referential movies about movies dating from the 60s and 70s. The Underneath was a more direct remake, of the 40s noir Criss Cross, and it was an interesting variation rather than any sort of improvement. Yet part of what’s so good about The Limey (1999, 91 min.), a contemporary thriller starring Terence Stamp as an ex-con avenging the death of his daughter, is the way it evokes Point Blank, which is still John Boorman’s best movie. The complex play with time, the metaphysical ambiguity, the stylish wit and violence, and the cool sense of LA architecture all evoke that singular Lee Marvin vehicle. For that matter, a lot of flashback material about the hero as a young man comes straight out of Ken Loach’s Poor Cow (1967). But with or without a sense of where it all comes from, this is a highly enjoyable and offbeat thriller — better to my taste than Soderbergh’s Out of Sight, though similarly quirky in how it sets about telling a story. With Peter Fonda and Lesley Ann Warren; Lem Dobbs wrote the script. (JR)