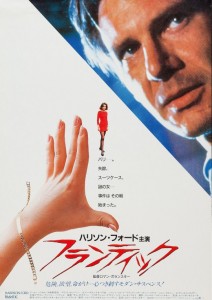 Roman Polanski’s first thriller after Chinatown – set in Paris, and cowritten with Polanski’s usual collaborator, Gerard Brach — describes the puzzling adventures of Dr. Richard Walker (Harrison Ford) after his wife Sondra (Betty Buckley) disappears from their hotel room. It opens promisingly, with a fine sense of the disorientation of a monolingual tourist abroad and in trouble. But instead of things building from there, the energy gradually dissipates, and by the time the mystery is solved, it’s difficult to care very much. Polanski seems to have something in mind about American innocence and international power (the Statue of Liberty is used as a significant icon), but his usual surrealism is almost completely absent, and most of the visual motifs — the collection of garbage in the morning, the matching red dresses of Sondra and Walker’s loyal sidekick Michele (Emmanuelle Seigner) at the climax — register mainly as empty signifiers (1988). 120 min. (JR) 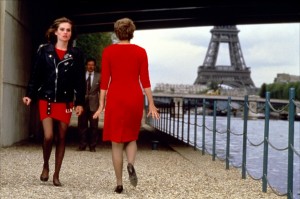