Roman Polanski’s 2002 film about classical pianist Wladyslaw Szpilman (Adrien Brody), a Polish Jew who managed to survive the Warsaw ghetto, won the top prize at Cannes and an Oscar for best director, and it’s easy to understand why: Polanski, himself a survivor of the Krakow ghetto, is so authoritative in showing us what life there was like that this film makes more conventional heart tuggers like Schindler’s List shrivel to insignificance. He appears to follow Ronald Harwood’s adaptation of Szpilman’s autobiography with scrupulous thoroughness, as well as with the special patience that it takes to show a passive and mainly unheroic victim surviving. All of Polanski’s films reflect the grimness of his war experience in one way or another, and this feature serves to clarify some of the emotions and attitudes found in the others. The results are masterful, admirably unsentimental, and never boring, if also a little stodgy. The Polish dialogue is rendered as English, the German is simply subtitled. R, 148 min. (JR) 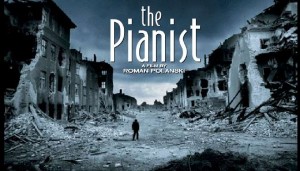