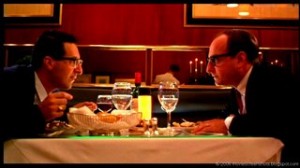 Robert Redford’s best and richest directorial effort (1994, 130 min.) unpacks the TV quiz show scandal of the late 50s, when glamorous intellectual Charles Van Doren, star contestant on the quiz show Twenty-One, belatedly confessed that he’d been fed all the questions in advance. As played by Ralph Fiennes (Schindler’s List), Van Doren is lamentably not much more than a shallow icon (though Paul Attanasio’s script works overtime making him appear sympathetic), stripped of the real-life ambiguities and hidden depths that were apparent to everyone who followed the story at the time. Despite these and other predictable simplifications, the story is allowed to retain much of its resonance and suggestiveness — as an instance of ethnic and class conflict as well as a landmark in media bamboozlement — and even some of the network and corporate culprits in the original fraud are singled out and named. Rob Morrow is especially good as Richard N. Goodwin, the feisty and ambitious House subcommittee member who helped to uncover the scandal, even though it meant fingering a man he admired (though the film, based on a chapter in Goodwin’s book Remembering America: A Voice From the Sixties, exaggerates Goodwin’s role in the investigation), and John Turturro is effective as Herb Stempel, another Twenty-One contestant whose disgruntlement as an involuntary loser on the show was crucial in bringing Van Doren down. With David Paymer, Christopher McDonald, Paul Scofield (as poet Mark Van Doren), and Elizabeth Wilson. (JR) 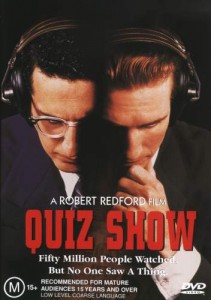