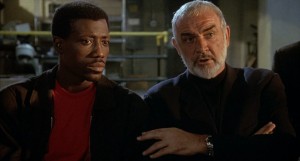 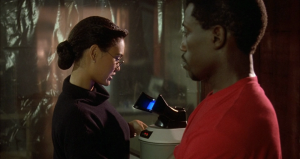 Some of my colleagues criticized this Philip Kaufman cop movie for softening the anti-Japanese feeling of the Michael Crichton novel it adapts — for coming down on corporate capitalism in general more than Japanese capitalism in particular, and diluting or at least complicating the racial implications by making the principal hero black instead of white. But I found it pretty entertaining, as well as provocative in some of its comments about contemporary life. Just about everyone — including Wesley Snipes and Sean Connery as a couple of LA cops uncovering a business conspiracy while investigating a murder — turns out to be somewhat corrupt, and the Connery character’s pithy explanations for the cultural and behavioral differences between the Japanese and American characters help to ameliorate some of the traces of xenophobia that remain. I’d rather see Kaufman upgrading the hackwork of Crichton than degrading the good work of Don Siegel (Invasion of the Body Snatchers) or Milan Kundera (The Unbearable Lightness of Being). While most of the opportunities to make this a first-rate thriller are wasted, it’s still a pretty good second-rater. Written by Kaufman, Crichton, and Michael Backes; with Harvey Keitel, Cary-Horoyuki Tagawa, Mako, Ray Wise, and Tia Carrere. (JR) 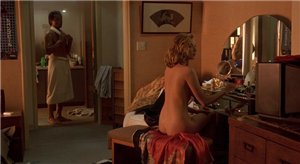