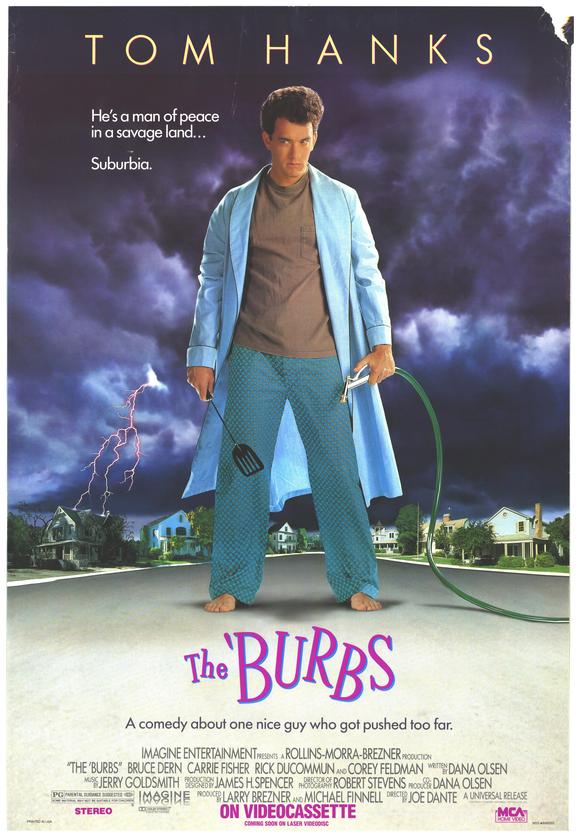 Director Joe Dante is the perfect refutation of the idea that popular American comedies have to be simple. His movies are never pretentious or difficult to follow, but embedded in each of them are a sophisticated understanding of popular culture and an awareness of the multiple stances and positions that are possible within the confines of supposedly simple genre movies.

Gremlins offered an ambiguous cluster of proliferating beasties to illustrate a cautionary moral fable about magic; it also managed to be an amoral satire of the same facets of the American dream exalted in the fable. Innerspace postulated the injection of a miniaturized Navy test pilot (Dennis Quaid) into the body of a hypochondriac (Martin Short), leading to simultaneous and parallel narratives as each character’s progress influenced the other’s.

A knowledgeable connoisseur of the American cartoon, Dante makes movies that take place in the kind of manic world where anything can happen. This sensibility bore particular fruit in his segment of Twilight Zone: The Movie (set in a universe ruled by the mind of a vindictive little boy who loved cartoons) and the climactic sequence of his Explorers (a nightmarish Mixmaster version of American TV strained through the sensibility, body, and technology of an extraterrestrial mimic); both of these segments anticipated the subversive universe that other filmmakers developed on Pee-wee’s Playhouse. In ideological and aesthetic terms, this translates into an ability to make different movies for different audiences at the same time. Expedient rather than cynical, Dante nearly always contrives to give his audience at least two movies to choose from: in Gremlins one can enter either the idealized Capra universe or the irresponsible realm of the monsters who seek to undermine it; in Innerspace one can identify with the adventures and attitudes of either the pilot or the neurotic. 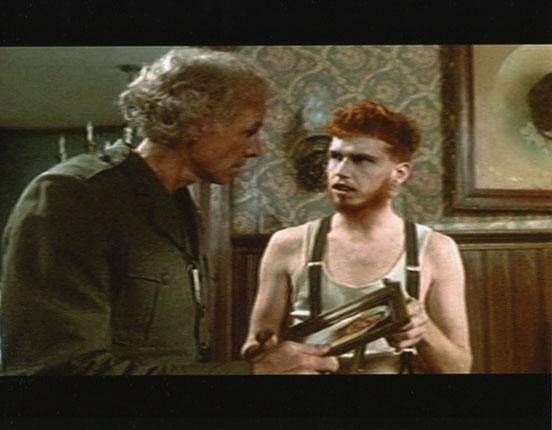 In the case of The ‘Burbs, Dante’s latest fantasy-tinged comedy, the moral choices available to the viewer are even broader. The movie can be read as a satire about suburban conformists and snoops — xenophobic busybodies who can’t tolerate the presence of any sort of eccentricity in their midst. Or the movie is a cautionary tale about the dangers of insulation and ignorance — minding one’s own business and being unaware of the horrible things that are happening right next door. Or, finally, one can take the noncommittal stance assumed by the teenage characters in the movie, who are as undisturbed about the mysterious neighbors as they are amused by the xenophobic snoops trying to uncover them; the kids are simply around to enjoy the show.

By building all three seemingly contradictory attitudes into this movie, Dante and screenwriter Dana Olsen aren’t abdicating their moral responsibility. It might be more accurate to say that they’re honoring the pluralistic and democratic possibilities of their story, and doing so in such a way that the viewer doesn’t have to adopt any one of these three attitudes exclusively. The pseudomoralistic stance of an overtly preachy and hypocritical movie like Mississippi Burning, which is designed to flatter spectators while inviting them to luxuriate in a shower bath of their own moral indignation and self-righteousness, doesn’t offer the possibility of more than one angle on the action. This isn’t to say that the movie would be better if it gave the viewpoint of racists; the point is that even the film’s treatment of justice and compassion is simplistic and one-sided — it’s set up for instant emotive effects rather than for any thought or reflection. The ‘Burbs, which has no pretensions at all about “making a statement” or addressing a social issue, implicitly respects an audience’s ability to consider events rather than merely react to them, and to do so from more than a single perspective. 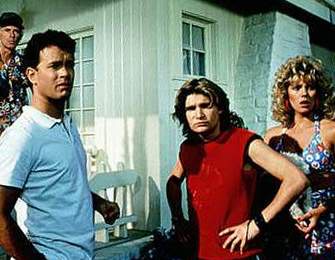 The plot couldn’t be simpler, and if Dante is grand enough to begin and end his movie with a shot of the spinning globe, he takes care to remind us that it’s nothing more than the Universal Pictures logo. In a suburban neighborhood — actually Colonial Street in the Universal Studios back lot, where Leave It to Beaver among other TV shows was set — Ray Peterson (Tom Hanks) is spending his vacation at home, but his peace is disturbed by the presence of a strange new family on the block, the Klopeks. His paranoid neighbor Art (the John Candy part played by Rick Ducommun) informs him that the family’s previous house burned to the ground, and that the three members of the all-male family never seem to go out except at night.

The disappearance of another neighbor starts to get Ray and Art even more hot and bothered, and they’re joined in their suspicions by Mark (Bruce Dern), a cantankerous Vietnam vet who’s even more intolerant of the Klopeks’ weirdness. At night, they witness all kinds of strange goings-on at the dilapidated Klopek house: a lightning rod on the roof causes the basement to blaze with fiery light (shades of Frankenstein), and the youngest member of the household, Hans (Courtney Gains), removes a suspicious-looking garbage bag from the trunk of his car. 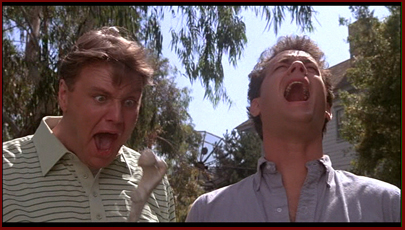 Ray also learns from his son, Dave, that the Klopeks have been digging holes in their backyard at night, and a neighborhood dog retrieves a human thighbone — from the same yard. But as the plot thickens and the mystery deepens, it becomes increasingly clear that Ray, Mark, and Art are the only ones who are worried about the Klopeks, or at least worried enough to start snooping in earnest. Ordinarily one would expect the local kids to become the amateur sleuths in this sort of plot, but Ray’s son, while observant, is basically unconcerned, and Ray’s wife, Carol (Carrie Fisher), and Mark’s wife, Bonnie (Wendy Schaal), only become involved in order to placate their husbands. Ricky (Corey Feldman), the local teenager, is interested only as a passive, amused spectator. He treats the activities of his older neighbors — Klopeks and straight men alike — like a drive-in movie, going so far as to set up chairs on his porch facing the action.

Part of Dante’s wit and talent in handling this bunch of characters is to view them all from an affectionate but critical distance. Mark and Art are depicted mainly as bumbling fools, and while Tom Hanks’s Ray seems a little less silly than his fellow sleuths, the movie never asks us categorically to share his viewpoint either. When we finally get to see more of the Klopeks — Uncle Reuben (Brother Theodore) and Dr. Werner Klopek (Henry Gibson) — they basically come across as stock Old Dark House residents with a few Nazi mad-scientist trimmings. But the movie isn’t so much concerned with proving that Ray and his cohorts are either right or wrong about their suspicions (although it proves incidentally that they’re right as well as wrong) as it is in showing the comic interactions between all the people in the neighborhood. Several points of entry are offered to the audience in assessing this very anti-Spielbergian suburban hell, and all of them are equally funny. 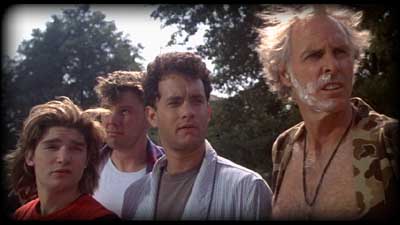 The ‘Burbs is a small and modest entertainment rather than a broadside, so one doesn’t want to make too much of its clever strategies, which convert its three adult heroes into children, their wives into mothers, and the neighborhood kids into relatively mature grown-ups. Some of the pleasures to be found in the margins of this romp are the inside references that tend to be a Dante specialty, ranging from a box of Gremlins breakfast cereal to the name of the author of a dusty volume called The Theory and Practice of Demonology (one Dr. Julian Karswell, a character played by Niall MacGinnis in Jacques Tourneur’s classic Curse of the Demon). But I might add that by sticking exclusively to their suburban turf, and treating it frankly like a movie set, Dante and Olsen make their snug little world as wide and as varied as the Universal globe that contains it.