Desperate Measures [OUT OF SIGHT & THE BRIGANDS: CHAPTER VII] 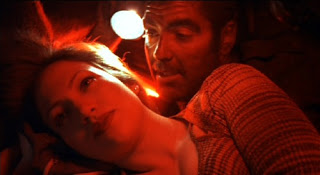 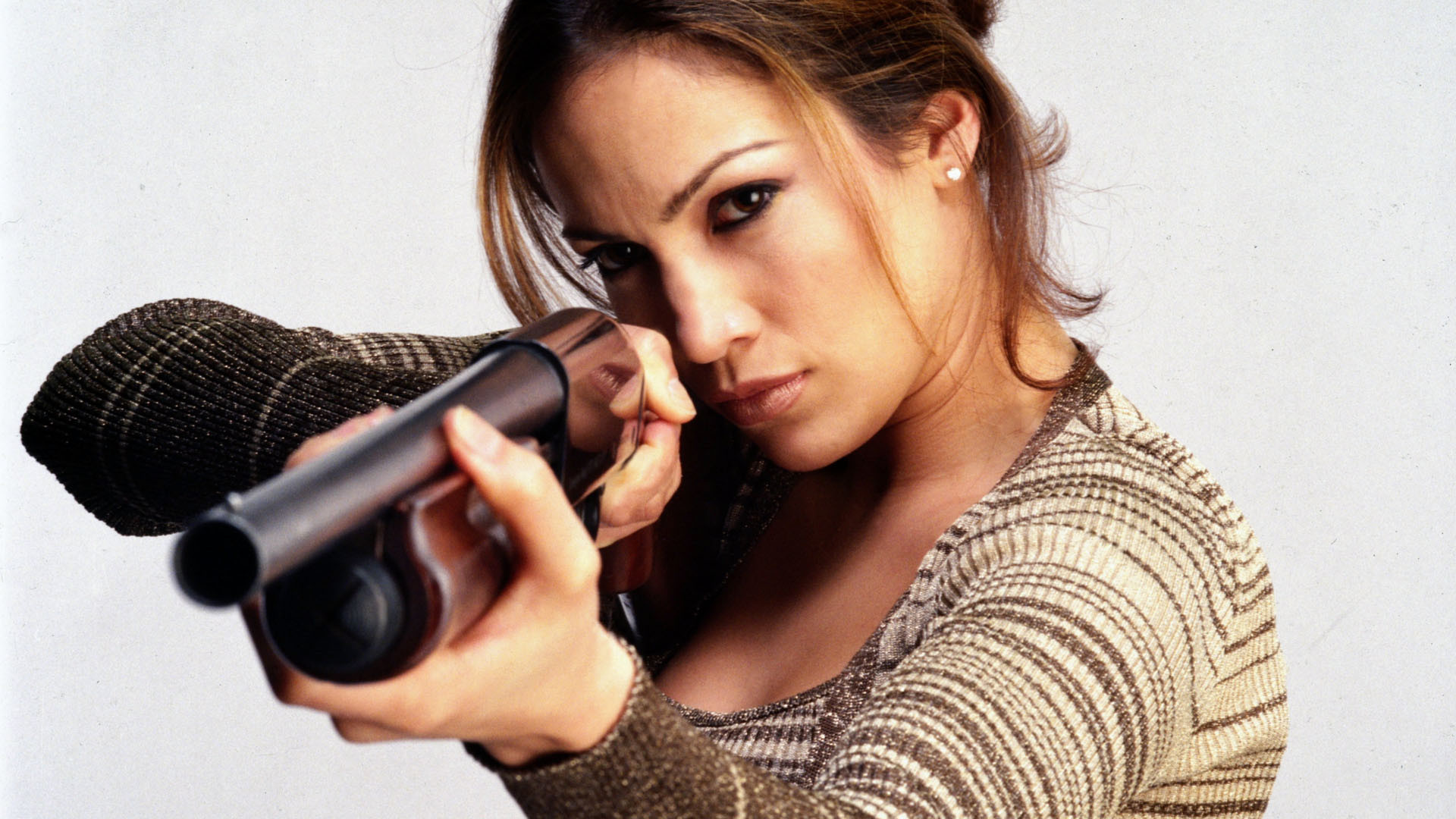 Which would you rather see? A Hollywood thriller with hot stars whose director is so alienated from his material that he’s reduced to a kind of ingenious doodling while his characters disintegrate? Or a witty, despairing French-Russian-Italian-Swiss art movie set in 16th-century Georgia, Stalinist Georgia, contemporary Georgia, and contemporary Paris, whose writer-director is so much in command of his materials that he can plant the same actors in all four settings yet provide a seamless continuity?

My question is mainly rhetorical because it’s already been decided for most people reading this. Out of Sight, a major Universal release written by Scott Frank and directed by Steven Soderbergh, is playing all over town and will be around for weeks; The Brigands: Chapter VII, written and directed by Otar Iosseliani, doesn’t even have a U.S. distributor and is playing for only one week at Facets Multimedia Center before disappearing indefinitely.

I saw these movies on successive days and couldn’t give you a coherent synopsis of either one to save my life — not only because both pictures leap about in time with willful abandon, but also because they have much more to say in terms of style than in terms of plot. Both films strongly convey the estrangement of exiles — literal exile in the case of Iosseliani, a Georgian based in Paris, and vocational exile in the case of Soderbergh, hired this time not as an auteur but only as a journeyman director. He appears alienated from the story and cast he’s been assigned and from the reason (as opposed to the way) the pieces in his jigsaw puzzle are supposed to fit together. By contrast, Iosseliani — a wry, poetic filmmaker with about a dozen features to his credit — seems alienated from most ideas of human progress and maybe from human behavior as well, though when it comes to filmmaking he seems right at home.

Both movies last a little longer than two hours and require total immersion as well as frequent readjusting of when and where you are in the overall patchwork construction. I enjoyed both for most of their running times, but Out of Sight engaged me less and less, until by the end I no longer cared which of the characters lived or died. Not even the engaging Jennifer Lopez, George Clooney, Albert Brooks, Don Cheadle, and Ving Rhames or the talented secondary cast can survive the abbreviations and last-minute shoehorning their characters receive. The Brigands, which has no stars that I recognize, has characters that persisted for me throughout, even when they were transposed to different eras and identities — a 16th-century king (Amiran Amiranachvili), for instance, becomes an early-20th-century pickpocket and a contemporary homeless Parisian. The film engaged me more and more as I watched it, though not because I cared which characters lived or died. This is mainly because of the camera setups: Soderbergh is obliged by commercial practice to shoot close-ups as well as medium and long shots, thereby signaling which characters are more worthy of our attention; Iosseliani is free to omit close-ups and shoot all his characters in medium and long shots, thereby displaying an equal amount of affection or contempt for all of them. 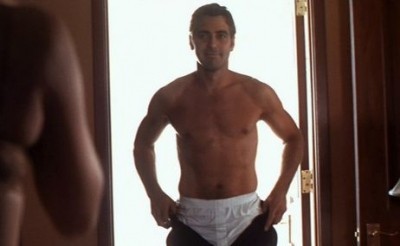 I didn’t believe anything that happened in Out of Sight for a millisecond, but it became clear early on that I wasn’t supposed to. Based on an Elmore Leonard novel I haven’t read and chock-full of familiar faces — including a couple who aren’t credited — the film lives exclusively on generic expectations, not on notions about life or personality that exist independent of other movies. That’s why when Michael Keaton and Samuel L. Jackson turn up we’re supposed to think of Michael Keaton and Samuel L. Jackson — not to mention Quentin Tarantino, Elmore Leonard, and Jackie Brown — more than the characters they happen to be playing. That’s also why when some characters alternate between being brainy and brainless, it isn’t because real people behave that way but because thrillers require brainy characters in some scenes, brainless ones in others. (At least the brains of the spectators, who are expected to sort out all the time shifts, are treated with a little more respect.) The story has something to do with the mutual attraction between a longtime bank robber (Clooney), who breaks out of prison in Florida and plans to rob a billionaire ex-convict (Brooks) in Detroit, and a federal marshal (Lopez), who’s supposed to bring the bank robber in. But what these people actually have on their minds is neither clear nor functional, beyond what’s needed to motivate a few set pieces. By the end the story line has so many loose strings I gave up caring about any of them. 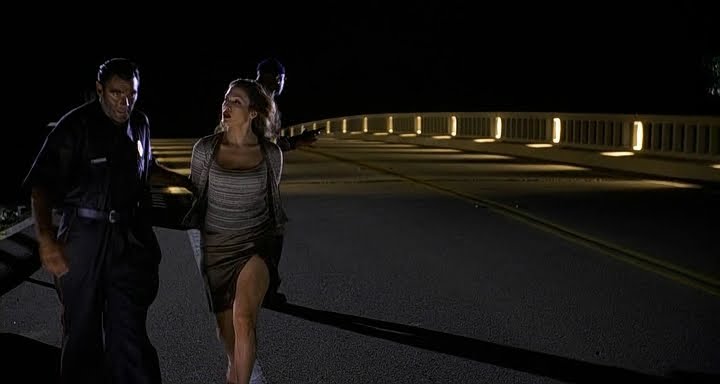 Soderbergh frequently makes his presence felt as a formal annotator — periodically halting the action with freeze-frames, using elaborate color-coding schemes (as if to remind us of The Underneath, much as Keaton reminds us of Jackie Brown), and crosscutting between successive scenes with the same characters (the dialogue in the first becoming offscreen narration in the second), recalling Nicolas Roeg’s Don’t Look Now (as well as Roeg’s mentor Alain Resnais). Banished as an auteur, Soderbergh is free to scribble in the margins all he likes, so he has a field day. In a climactic sexual encounter between Lopez and Clooney in a hotel bar and suite, this yields a piece of visual enchantment almost worthy of another studio slave, Vincente Minnelli — a sequence involving jokey foreplay, fluttery snowfall, blurry lights, discarded bits of clothing, voices drifting in and out of synch, and oodles of freeze-frames. 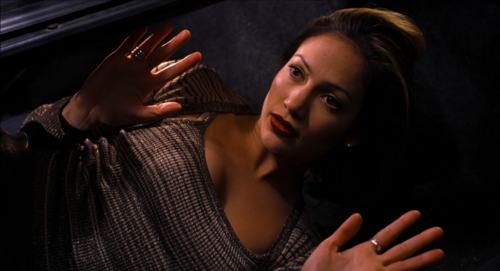 But it can’t yield characters we can care about, because these postulates aren’t even granted the continuity accorded to Soderbergh’s scribbles. All we get is a stellar cast looking in vain for a story that can make them something more than props. That’s probably why just about every death was greeted by laughter at the matinee I attended; if anyone can be transformed into a prop at a moment’s notice, the dead can easily be seen as comic props. Some reviewers have applauded Out of Sight for its nuances of character, but I and others don’t see any characters at all. I assume the difference in viewpoint has to do with whether our definitions of character depend on references to other movies. Reviewers, expected by the promo machine to come up with superlatives, have been saying that this is the best Pulp Fiction imitation to date, the best Elmore Leonard adaptation, the best Soderbergh film since Sex, Lies, and Videotape. I’d call it the best film of the past month or so that gets laughs from most of its deaths.

Iosseliani doesn’t need to scribble in the margins of his own work, because the text belongs exclusively to him — not to a consortium of executives and publicists. He even felt free to include a jokey, cryptic subtitle (Chapter VII) that no one to my knowledge entirely understands. At the beginning of The Brigands six men turn up for a private screening, but the next thing we see is a boy turning up at an orgiastic party of semiclad couples and mowing them down with a machine gun. A woman scolds the projectionist for putting on the last reel instead of the first (almost two hours will pass before we reach the massacre again). Then the film begins all over again, title and all, and proceeds from the Middle Ages (shot in a gracefully choreographed style suggesting silent cinema) to the present and back again, while showing us some of the everyday events of warfare and political oppression and their effects on civilian life.

Betrayals abound in every era (Georgia under Stalinism seems especially close to Iosseliani’s heart). Before going off to fight, the medieval king locks his queen’s privates in armor, and the key promptly gets tossed out a window to her lover. A Stalinist official gives his little boy a friendly tour of his torture compound — lovingly inventorying his torture instruments — before packing him off to school, where the boy promptly reports to a teacher a couple of innocuous things his father once said, which eventually yields a report that’s read to a higher-ranking Stalinist official.

Lots of people die in this movie, but I doubt that anyone would laugh out loud at their deaths, even though the overall tone is considerably more comic than that of Out of Sight. The Brigands makes one laugh silently and secretly, with a kind of wistful melancholy about the way the world works. With some justice, Iosseliani has been called the Georgian Jacques Tati, and not only because he favors quizzical long shots and uses a minimum of dialogue; it’s the serenity of his gaze and the ease with which he links one event to another that clinch the comparison. Yet for all the horror of what he’s depicting here — torture, betrayal, children slaughtering their own relatives, a pickpocket enlisted by communists to become a powerful bureaucrat, casual executions, drunken indifference — his tone remains calmly, mordantly amused throughout. For all the underlying anger and sorrow, he never makes anything he shows difficult to watch.

Paradoxically and mysteriously, Iosseliani, unlike the director of almost any Hollywood thriller nowadays, can’t be described as antihumanist. He’s basically concerned with the normality and banality of evil — with the warmth between son and father when the father shows off his torture instruments, with the no-less-genuine warmth between son and teacher when the son tattles on his father, with the innocuous sight of blood being mopped up by a janitor or a blanketed corpse being wheeled away down a hall. It’s a style that becomes bearable, sometimes even beautiful, only because it’s a vision grounded in a poetics — something Soderbergh can’t reach for except in snatches, because his text belongs to the company store.