Scenes From A Mall 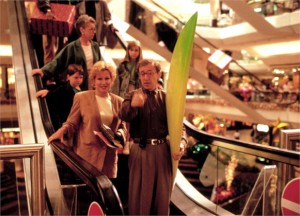 A middle-aged couple (Woody Allen and Bette Midler) in southern California celebrating their 15th anniversary go to a shopping mall, and they proceed to decompose and recompose their relationship on the basis of various revelations. Although this only runs for about 90 minutes, it’s the emptiest and most long-winded movie Paul Mazursky (working here with his frequent cowriter Roger L. Simon) has ever made, a disappointingly steep descent after his Enemies, a Love Story. The characters never come to life, and restricting almost all of the action to a gigantic mall only makes the narrowness and boredom of the movie more obvious. Mazursky has returned with a vengeance to his special universe where the upper middle class is the only thing that exists, and this time he has absolutely nothing to say about it. (JR) 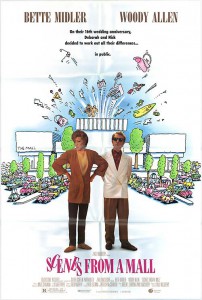