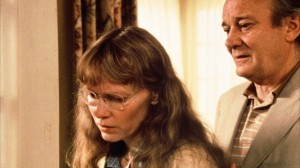 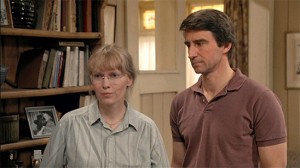 Woody Allen’s worst film and second pure noncomedy — a desperate low-energy recycling operation — features four (or, arguably, five) cases of unrequited love among six characters stagebound in a New England summer house for about 18 hours: a suicidal depressive (Mia Farrow), loved by both her flamboyant mother (Elaine Stritch) and a middle-aged widower (Denholm Elliott), loves only an unfulfilled writer (Sam Waterston), who loves only the suicidal depressive’s best friend (Dianne Wiest), who doesn’t know who or what she wants. To add a little contrast, the mother is happily married to a physicist (Jack Warden), but just to make sure that we don’t jump to any wrong conclusions about this, the latter imparts to us the helpful wisdom that the meaninglessness of the universe is more depressing than the threat of nuclear annihilation (perhaps the key to Woody’s no-sweat politics). Wiest remarks at another point that she’s married to a radiologist, but she won’t let him x-ray her because she doesn’t want him to know what’s inside her. Most of the writing is on this glib and wretched level, and the laws of diminishing returns and what James Agee once called rigor artis set in with a stultifying vengeance. The actors hold up bravely under the circumstances, propping up the material with whatever they have on hand, but to no avail; this isn’t even an honorable or interesting failure like Interiors or Stardust Memories. (JR) 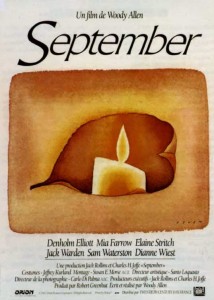 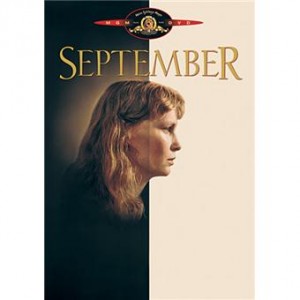