In the first of his independent features as producer-director (1953) Otto Preminger adapts his most successful stage production, a light romantic comedy by F. Hugh Herbert that ran for over 900 performances. Released without production code approval and condemned by the Legion of Decency for its use of such taboo phrases as virgin, seduce, and pregnant, none of which bothered anyone in the stage run, it’s regarded today mainly as a curio. Yet for all the movie’s staginess and datedness, it’s a more personal and ambiguous work than it initially appears to be. Architect William Holden ogles and picks up professional virgin Maggie McNamara at the Empire State Building and brings her back to his apartment, where his next-door neighbors — his former girlfriend (Dawn Addams) and her playboy father (David Niven) — quickly involve this potential couple in various intrigues. A certain prurient (as well as analytical) curiosity in Preminger’s distanced and mobile camera style makes McNamara seem slightly corrupt and Holden and Niven slightly innocent, despite all appearances to the contrary, and the sour aftertaste to this frothy material is an important part of what keeps the picture interesting. Incidentally, Preminger simultaneously shot a German-language version of the same film, the stars of which have cameos in the last scene of the American version. (JR) 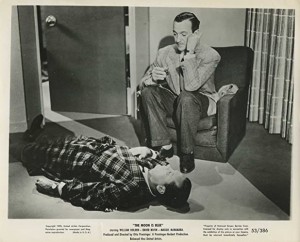