Paul Mazursky’s umpteenth remake of 8 1/2, which only goes to show that if you keep imitating the same movie you’re bound to get progressively staler, not fresher. And unlike such brittle 8 1/2 imitations as All That Jazz and Stardust Memories, this one starts out mushy and gets softer and softer as it develops. The story covers about 36 hours in the life of celebrated writer-director Harry Stone (Danny Aiello) after he arrives in New York from Paris for the preview of his new picture, a teen fantasy called The Pickle that he considers a sellout and fears will be a flop. Before long, we also meet his longtime agent (Jerry Stiller), 22-year-old French girlfriend (Clotilde Courau), and several relatives or ex-relatives (“I’m your ex-wife, Ellen,” Dyan Cannon announces to him and the camera at a surprise party, just in case he or we don’t remember.) Periodic black-and-white cutaways to Stone’s Jewish childhood in Brooklyn and clips from his new color movie show off cinematographer Fred Murphy’s talents much more than Mazursky’s, whose wit seems to have deserted him almost entirely; the final impression is much closer to Jaglom’s Venice/Venice than to Fellini. With Shelley Winters, Barry Miller, Christopher Penn, Spalding Gray, and, doing unrewarding cameos in the film-within-the-film, Ally Sheedy, Griffin Dunne, Little Richard, Dudley Moore, and Isabella Rossellini. 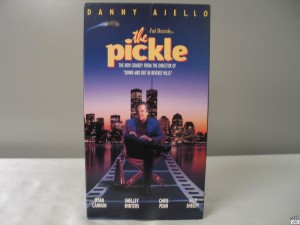