Lost in Auschwitz [SON OF SAUL]

“The sense of being lost is what we wanted to convey. That is what was missing before [in most earlier movies about the Holocaust]: one individual being lost.” — László Nemes to Andrea Gronvall, Movie City News 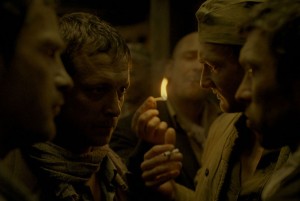 László Nemes’ Hungarian debut feature, Son of Saul, opening this week at the Music Box, is easily the most exciting new film I’ve seen over the past year, and a casual look at the prizes and accolades it’s received over the past eight months, starting with the Grand Prix and the FIPRESCI prize at Cannes, shows that I’m far from alone in feeling this way. Even my colleagues who dislike or dismiss the films concede that it’s a stunning technical achievement. But the moment one starts to describe what the film does, or even what it’s about, a certain amount of dissension sets in.

Nemes and his lead actor Géza Röhrig have consistently described their intentions as wanting viewers to experience viscerally and as accurately as possible what Sonderkommando members went through in Auschwitz in October 1944. These were the Jewish prisoners obliged to lead other Jews into the gas chambers, search their clothes for valuables before, during, and after they were being gassed, and then dispose of their bodies — carting them off, burning them, and then shoveling away their ashes, receiving in return slightly better food and quarters before eventually being exterminated themselves. The only direct records we have of their experience were written and buried by a few members — we may be witnessing one such burial, out of focus, in the film’s opening shot — to be read by future generations, and Nemes made his film to honor these accounts, adding that he’s left interpretations of this experience quite open.

Nemes compels us to witness the horrors of the Holocaust only peripherally, the way that his protagonist, a Hungarian Sonderkommando named Saul Ausländer, sees them while being forced to do his work. The film begins and ends with images that exist independently of Saul’s perceptions, and most of the shots in between, while not literally subjective, are restricted to what remains within his field of vision, often in close-up. (Using a narrow screen ratio and shooting on 35-millimeter film, Nemes also wants us to see Son of Saul that way, which is why it’s showing here at the Music Box and not elsewhere.) And the dialogue, by Nemes and his cowriter, novelist Clara Royer — in German, Yiddish, Hungarian, and Polish — is equally constrained, consisting of terse and telegraphic whispered exchanges that are all the prisoners can manage while being hustled or hurtled from one job to the next.

I assume this storytelling strategy is what led the New York Times’ Manohla Dargis to describe the film, in a report from Cannes, as “radically dehistoricized” and “intellectually repellent” — attributes that I’d be more inclined to assign to the period bloodbaths of Quentin Tarantino, (including the his latest one, also showing at the Music Box). But Tarantino’s pop credentials seem to grant him a certain leeway denied to art movies. Dargis’s Times colleague A.O. Scott concluded his mainly respectful review by writing that Nemes’ “skill is undeniable, but also troubling. The movie offers less insight than sensation, an emotional experience that sits too comfortably within the norms of entertainment.” In some respects, this dimly recalls Theodor Adorno’s famous 1949 statement — “To write poetry after Auschwitz is barbaric” — albeit presumably revised to allow for the playfully impudent entertainments of a Tarantino, if not for the visceral art strategies of a Nemes, who plays for higher stakes. 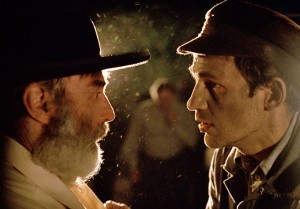 Complicating all this is the narrative thread Nemes has chosen: during one operation, Saul witnesses the seeming miracle of a Jewish boy briefly surviving the gas chamber (before being smothered to death by a Nazi soldier) and then becomes obsessed with the notion of  giving the boy’s corpse a proper Jewish funeral with a rabbi, improbably declaring to other prisoners that the boy is his son. Given Saul’s own circumstances, including his stated conviction to another prisoner that “we’re already dead”, his obsession with granting the boy a Jewish funeral is completely irrational — though as filmmaker Mehrnaz Saeed-Vafa has pointed out to me, no more irrational than the obsession of Mr. Badii in Abbas Kiarostami’s Taste of Cherry to find someone who will agree to bury him after he commits suicide in an open grave. Each is a given we’re obliged to accept in order to follow the film’s narrative, and once we accept it, we find ourselves at the center of an ambiguous parable about life as well as death.

This is where the real dissension sets in, not only over what the film does but in what it’s about. I would argue that Saul’s mission is a practical way of holding onto his sanity in the midst of facilitating the genocide of his own people, even as he fails to help implement a planned escape from the camp and unwittingly causes the death of at least one other of his crew). By contrast, critic J. Hoberman, writing in Tablet, calls Son of Saul, “a movie set in Auschwitz that concerns a member of the Sonderkommando who goes mad,” which I suppose makes an equal amount of sense.

A former assistant to Béla Tarr, another Hungarian (Sátántangó, Werckmeister Harmonies), Nemes is no less concerned than his mentor with implicating the viewer in the movements and perceptions of his characters and in their moral and humanist consequences, without ever explicitly judging who they are or what they do—the style of a rigorous existential taskmaster. But Tarr’s rhythms are slow whereas Nemes’ are frenetic, giving us, like Saul, less time to think or reflect and more compulsion to act or react spontaneously. Seeing the film as a Jew who knew about the Sonderkommando (and who regarded their job and fate as the very worst of all the Nazis’ crimes) but who’d never been forced to identify with them, I found myself sharing Saul’s panic and predicament, and that response becomes part of the meaning and significance of the parable.

The hero’s full name becomes another part — not only “Ausländer“, German for “foreigner“, but also “Saul”, suggesting the Saul who became Saint Paul on the road to Damascus, moving from Judaism to a wider sense of humanity. After the hero escapes with other prisoners from the camp and loses the boy’s corpse in a river, he briefly sights another boy — alive, Polish, clearly not Jewish — and he smiles for the only time in the film, beatifically, out of the simple pleasure of seeing a living child. Finally, the claustrophobic spell of tribal Judaism — decreed in Auschwitz by Nazis and Saul alike as an ultimate curse or blessing — has been broken and something more transcendental, fleeting, and even faintly hopeful emerges, in the film’s closing moments. 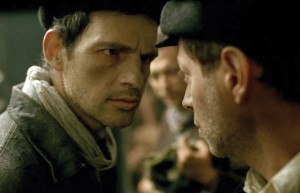