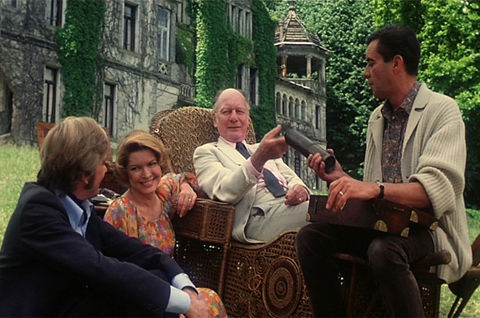 Alain Resnais’ first feature in English (1977, 110 min.) focuses on the imagination, dreams, and memories of an aging British novelist (John Gielgud) over one night as he mentally composes and recomposes his last book, using members of his immediate family — Dirk Bogarde, Ellen Burstyn, David Warner, and Elaine Stritch — as his models. Although David Mercer’s witty, aphoristic script can be British to a fault, the film’s rich mental landscape is a good deal more universal, with everything from H.P. Lovecraft’s werewolves to a painted seaside backdrop providing the essential textures. Like all of Resnais’ best work, this is shot through with purposeful and lyrical enigmas, but the family profile that emerges is warm and penetrating, recalling the haunted Tyrones in Long Day’s Journey Into Night rather than the pieces of an abstract puzzle. The superb performances and Miklos Rozsa’s sumptuous Hollywood-style score give the film’s conceit a moving monumentality and depth, and Resnais’ insights into the fiction-making process are mesmerizing and beautiful. This is showing in a 16-millimeter print, but later in the evening the Film Center will present 35-millimeter prints of Hiroshima, mon amour (1959) and Muriel (1963). Along with Last Year at Marienbad (1961) and Melo (1986), these three powerful works are Resnais’ greatest features. Gene Siskel Film Center, Columbus Drive at Jackson, Saturday, October 28, 3:00, 312-443-3737. –Jonathan Rosenbaum