From Monthly Film Bulletin, May 1976 (Vol. 43, No. 508). Many years later, I revised and expanded this review for an essay commissioned by the Masters of Cinema DVD of Spione, called “Inside the Vault”. –- J.R. 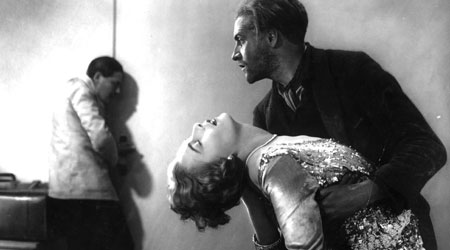 An unidentified European country. After two treaties are stolen by a spy ring, and all the best agents of Burton Jason, head of the Sectet Service, have been killed while attempting to recover them, Jason summons detective Donald Tremaine, who arrives disguised as a tramp. The master-mind of the thefts, Haghi — an apparent cripple who runs a bank and has built a spy ring mainly out of criminals he has secretly sprung from prison — assigns Sonia to find out from Tremaine when a new treaty is to be signed. Rushing into Tremaine’s hotel suite after shooting a man whom she claims attacked her (and who survives thanks to a wallet in his breast pocket which stops the bullet), she gets Tremaine to hide her and quickly charms him. Charmed herself, she begs Haghi to take her off the case, but he forces her to write Tremaine a letter, which he dictates. Tremaine comes to her house and they make a date for dinner, but she is called away from the restaurant by Haghi.

Hurrying to her house with a necklace she left behind, Tremaine finds it completely stripped of furnishings, and is told by fellow agent Dr. Matsumoto that she is a spy. Learning that the treaty has been signed, Haghi is foiled by a trick of Matsumoto’s whereby three agents are sent out with fake diplomatic pouches; he then asks his agent Kitty to recover the real treaty. Disguised as a homeless waif, she is taken home by Matsumoto and steals the document, whereupon, he commits hara-kari. Meeting with agents Tremaine and Nemo the clown, Jason asks Tremaine to deliver another copy of the treaty, and books his passage on the Europa Express. Promising Sonia he will spare Tremaine if she delivers a message across the border, Haghi nevertheless engineers a train wreck to kill Tremaine; but Sonia rushes to the accident amd frees him frorn the wreckage. She is kidnapped by Haghi’s ring, but is rescued by Tremaine. Discovering that Nemo is in fact Haghi, Tremaine and Jason corner him during one of his stage performances, and he shoots himself is a climax to his comedy act. 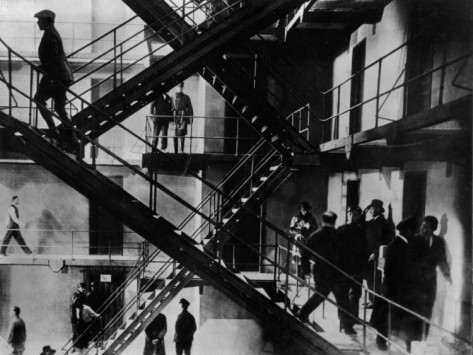 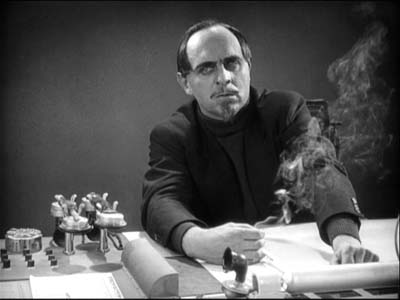 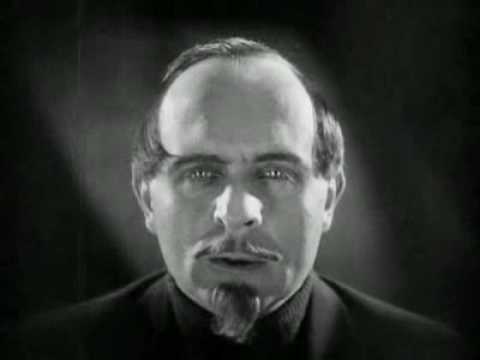 Apart from recurring close-ups of Haghi’s face wreathed in cigarette smoke, the central graphic image of Spione is a network of criss-crossing iron stairways and four tiered balconies just outside his secret headquarters. Located somewhere inside a bank, this dense passageway also suggests a prison-an impression fostered the first time we see it, when a prisoner saved miraculously from the gallows is delivered directly to the villain’s lair as the latest recruit into his spy ring. Even more oddly, the appearances of an elderly nurse and Haghi’s confinement in a wheelchair intermittently bring to mind a hospital. If proof is needed of the superiority of Lang’s German work over his Hollywood period, one need go no further than the metaphysical rigor of this dream-like locus of transitions — within a supposedly minor thriller virtually dismissed by Bogdanovich and others — which pointedly conveys the manner in which the entire film is structured round such irrational continuities. The first movie to be made be Lang’s own production company, which economized in time and money after the outsized expenditures of both on Metropolis, it was directly inspired by a story in the London Times about a Scotland Yard raid on a spy ring disguised as a Russian trade company. Immensely popular with the German public, it was the first film ever carried to the U.S. by plane, where it was released by MGM under its correct title Spies, in a shorter version which apparently approximates the prints now available. Among the losses appear to be a second diplomatic theft and murder at the beginning that now survives only elliptically, a subplot involving a traitor (Colonel Jellusic) who .sells secret documents to Sonia, and a revelation at the end of the film (which now finishes quite abruptly) that the elderly nurse working for Haghi was in fact his mother; others would doubtless help to account for the enigmatic early appearances of Matsumoto and various unexplained manoeuvres by Tremaine. At once a compression and refinement of Lang’s first great Mabuse film (with the villainous Klein-Rogge made into more of an abstraction by virtue of the sheer unmotivated gratuity of his schemes) and a brilliant forecast of the découpage of M (which links together diverse social forces in a montage pattern structured round a central figure who goads these forces into action and eventually becomes their victim), Spione strips the spy-thriller form down to basics and reveals in the course of this purification its underlying mechanisms. (In such a film, Lang remarked to Rivette and Domarchi in Cahiers du Cinéma No. 99, “there is only pure sensation, character development doesn’t exist”.) Thus the thriller’s function as oblique social commentary — a strain traceable back to Feuillade (where in Tih Minh, for instance, the resourcefulness of the servants continually points up the helplessness of the protagonists, their employers) — is sharply set in relief by the fat capitalist who is literally saved from death by the fat wad of bills in his pocket. At the same time, one finds a total abstraction of the political intrigue so that the contents of the various treaties bandied about and their import are never even mentioned, and the almost subliminal implications of Haghi’s power and omnipresence — with bank owner, ‘prison warden’, invalid, erotic manipulator/voyeur and clown comprising only a few of his identities — make him the ideal image for a social analysis that is everywhere implied but nowhere directly stated. On a more strictly formal level, the remarkable elliptical editing — especially apparent in the film’s opening, Tremaine’s bath as he transforms himself from tramp into urbane romantic lover, and the use of the key images cited above in the plot — contrives to organize the extraordinary density of the overlapping intrigues into a lucid pattern that has served as a sourcebook and object lesson for many subsequent master plotters, from Hitchcock and Graham Greene to Rivette, Straub and Thomas Pynchon. Much as the Tower of Babel sequence in Metropolis becomes a crucial reference point for the separate paranoid universes of Paris Nous Appartient, the newspaper montages of Spione bear fruit in the central sequence of Machorka-Muff, while the coded messages, erotic intrigues and multiple counter-plots lead one straight into the constructed/ deconstructed worlds of Out I: Spectre and Gravity’s Rainbow. (Significantly, the latter situates not only Lang’s German oeuvre within its complex spy network, but also the Neubabelsberg Studio, where Spione was shot.) Aided by voluptuous performances from Klein-Rogge, Deyers, Pick and Maurus (who, in her first role, often resembles Janet Leigh), Spione sustains its formal logic through countless dream-like images, many bordering on narrative illogic or a sense of the uncanny: Haghi glimpsed at the nightclub, immediately after Sonia has been slipped a message summoning her to his office; her dismantled house, gradually exposed in the glare of Tremaine’s flashlight; a drink offered to Sonia by Haghi with a glowing string of pearls wrapped round it; Matsumoto’s hallucinatory vision of his three dead agents returning with their fake treaties amidst falling sheets of paper and a superimposed Japanese flag, and his subsequent, powerfully rendered suicide; Haghi/Nemo’s strange clown act utilizing musical notes and instruments. Yet thanks to the film’s centripetal structure, these and other details take their place among the masterful suspense sequences as functional parts of an internal design no less encompassing than Haghi’s — geared round images of his presence and his passageways, both tokens of meaning and transition, which lock the machinations of an incoherent, malevolent universe precisely into position. 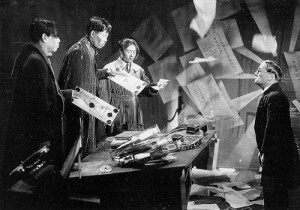