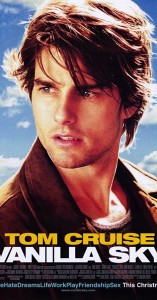 If you’ve ever wanted to bust Tom Cruise in the chops when he’s brandishing that self-infatuated, shit-eating grin — a desire even his hardiest fans must occasionally feel — then this is the movie for you. Cruise plays a Manhattan zillionaire who’s inherited a string of successful magazines; after screwing Cameron Diaz four times in one night (this is supposed to be the realistic part) he falls in love with another woman (Penelope Cruz) and winds up in an accident that leaves him disfigured like some character out of Victor Hugo. Director Cameron Crowe adapted the screenplay from Open Your Eyes (1997), a highly successful Spanish fantasy thriller by the talented Alejandro Amenabar, and while remaking a four-year-old film may seem silly, it perfectly fits the subject, remaking one’s life. Of course this version is much slicker, upgrading the original in some ways (if you prefer having everything spelled out) and overextending it in others (including the 130-minute running time); it reeks of unearned profundity, but I found it entertaining. With Kurt Russell, Jason Lee, and Noah Taylor; incidentally, Cruz played the same role in the Spanish film. (JR) 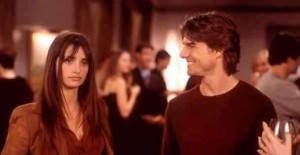