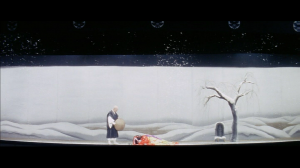 Kon Ichikawa’s 1963 masterpiece, one of the most dazzling and stylistically audacious Japanese films ever made, has to be seen to be believed — though in Japan, interestingly enough, it’s never been regarded as anything but a potboiler. The film was putatively made to celebrate the 300th film appearance of box-office idol Kazuo Hasegawa, and is in fact a remake of a 1938 film by Teinosuke Kinugasa that featured Hasegawa in the same parts. Ichikawa uses it as an unprecedented opportunity for unbridled stylistic play (the film’s use of ‘Scope and color is breathtaking), Shakespearean complication (Hasegawa plays two parts, one of them in drag), and a fascinating investigation into the relationship between theater and cinema. The hero is a Kabuki female impersonator out to avenge the death of his parents, and the plot proceeds somewhat like a film noir (with revelatory flashbacks), while adroitly mixing onstage and offstage action. To make the campy mixture even weirder, Ichikawa periodically uses contemporary jazz on the sound track. One can easily see here why Disney is one of Ichikawa’s favorite filmmakers, but perhaps the most remarkable aspect of this singular experiment is its demonstration that theater and film are more kissing cousins than distant relations — the more stage bound the film gets, the more cinematic it becomes.… Read more » 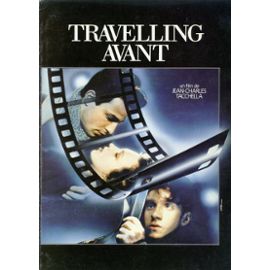 An ode to fanatical French cinephilia in 1948 — the generation immediately preceding the New Wave, to which writer-director Jean-Charles Tacchella (Cousin, cousine) belonged — this is a must-see charmer not only for crazed film buffs and Francophiles, but also for anyone wanting to follow the adventures of a passionate romantic trio of scruffy bohemians in their early 20s in a Paris that no longer exists. Like the New Wave figures who followed them, the young men in this milieu write about movies and aspire to be directors; as critic David Overbey put it, they live through film references: “They even take girls to bed talking about Howard Hawks’s women and wake up feeling like Bogart.” Much of the idealistic effort they display goes toward setting up a cineclub that shows rare films, though there’s also a certain amount of suspense involving a treasure trove of old movies the characters steal. Conventionally made, though potent and heartfelt in its feelings of personal nostalgia, this movie makes effective use of its cast of young unknowns: Thierry Fremont, Ann-Gisel Glass, and Simon de la Brosse (1987). Tacchella will introduce the film and answer questions afterward; cosponsored by the French consulate of Chicago.… Read more »

Salt of the Earth 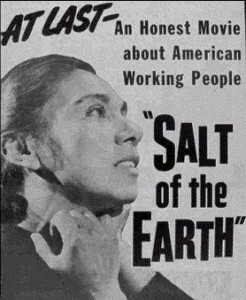 A rarely screened classic of 1954, the only major American independent feature made by communists. A fiction film about the strike by Mexican-American zinc miners in New Mexico against their Anglo management, informed by feminist attitudes that are quite uncharacteristic of this period, it was inspired by the blacklisting of director Herbert Biberman, screenwriter Michael Wilson (A Place in the Sun), producer and former screenwriter Paul Jarrico, and composer Sol Kaplan, among others. As Jarrico later reasoned, since they’d been drummed out of Hollywood for being subversives, they’d commit a “crime to fit the punishment” by making a subversive film. The results are leftist propaganda of a very high order, powerful and intelligent even when the film registers in spots as naive or dated. Basically kept out of American theaters until 1965, it was widely shown and honored in Europe (it was selected, for instance, as the best film shown in France in 1955), but it has never received the stateside recognition it deserves. If you’ve never seen it, prepare to have your mind blown. A new 35-millimeter print will be shown. Film Center, Art Institute, Columbus Drive at Jackson, Saturday, February 24, 6:00, 443-3737.… Read more »