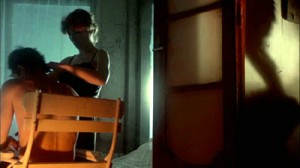 In his first three films Bela Tarr — conceivably the most important Eastern European filmmaker currently working — betrays an impatience with cinematic style, focusing almost exclusively on content, but that tendency was radically overturned with this 1984 feature, whose taste and intelligence are specifically (and exquisitely) cinematic and revealed Tarr as a master stylist. Set entirely in an apartment inhabited by an elderly woman, her son, his former teacher, the old woman’s nurse, and the nurse’s lover, the film consists mainly of intense two-part dialogues and encounters largely concerned with the old woman’s money. The remarkable use of color depends on a lighting scheme that divides most areas (and characters) into blue and orange, and the elaborately choreographed mise en scene is consistently inventive and unpredictable, making use of highly unorthodox angles and very slow camera movements. As in Damnation (1987), the mise en scene often seems to be composed in counterpoint to the action, but the drama itself (whose Strindbergian power and sexual conflicts are realized with an intensity and concentration that suggests John Cassavetes) carries plenty of charge on its own. 119 min. (JR) 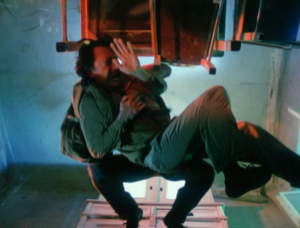