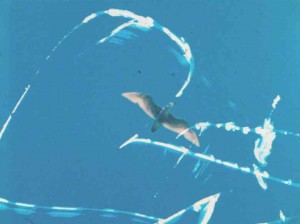 My exposure to Stan Brakhage’s massive oeuvre has been somewhat limited, but these four works made in 1998 are among the most exciting and ravishing I’ve seen, rivaling even Scenes From Under Childhood (1970). Aptly described by J. Hoberman of the Village Voice as “scratch-and-stain films,” these mainly nonphotographic works “are, among other things, a visual analogue to abstract expressionism.” Reel 1 (22 min.) registers as visual music in its development of motifs and its use of rests to divide the work into discrete sections–a music that pulses, throbs, and sometimes winks on and off like a strobe light. Reel 2 (15 min.) credits Sam Bush as the “visual musician” and Brakhage as the “composer”; more staccato, dramatic, and richly orchestrated than the first reel, it occasionally recalls early Stravinsky in its fierce rhythms. Reels 3 (15 min.) and 4 (20 min.) are my favorites: the former uses bursts of photography (water, sky, birds, forest, sand, a nude child, merry-go-round horses), and the latter often suggests animation, with a black field disrupted by tantalizing bursts and smears of color. Also on the program are two Brakhage works I haven’t seen — Coupling (1999, 5 min.) and Night Mulch & Very (2001, 7 min.). Presented by Chicago Filmmakers in conjunction with a special issue of the Chicago Review on Brakhage’s work; the filmmaker was planning to attend, but serious health problems have kept him at home in Colorado. Columbia College Ferguson Theater, 600 S. Michigan, Friday, April 26, 8:00, 773-293-1447.